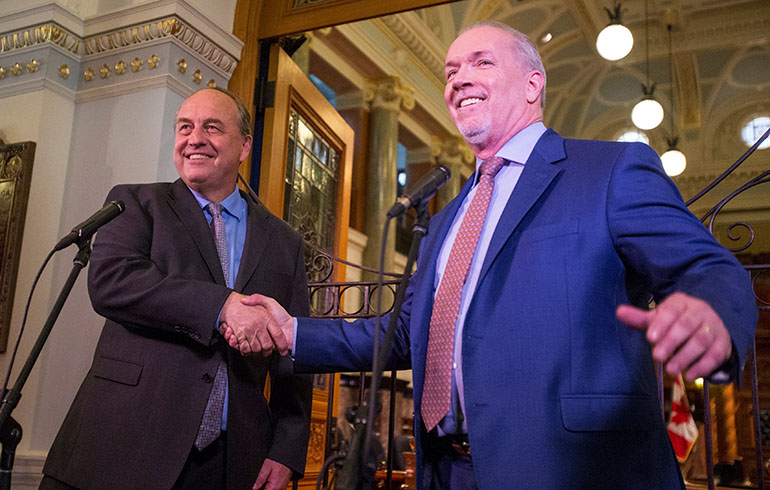 NDP leader John Horgan and Green Party leader Andrew Weaver announced yesterday at the B.C. Legislature that they have reached a four-year agreement to create a “stable minority government.”

“After several sessions with the B.C. Green caucus, we reached a historic agreement,” Horgan said to media and the NDP caucus this morning.

Hogan said that this alliance will allow his party to focus on the platforms and issues they campaigned on.

He also mentioned his intention to not only work with Weaver and the Green Party, but the provincial Liberals as well, with Horgan saying this is a “historic opportunity to demonstrate to all Canadians that people of good will can come together.”

The NDP and Green Party leaders describe the alliance as a “Confidence and Supply Agreement,” which guarantees support for budgets and motions. Additional details will be released when the NDP caucus approves the agreement today.

As a result of the May 9 election, the province’s 16-year run with a Liberal majority government has come to an end. Christy Clark’s Liberal government was elected to 43 seats of B.C. 87 ridings. The NDP has 41 seats and the Green Party has three.

“As the incumbent government, and the party with the most seats in the legislature, we have a responsibility to carefully consider our next steps,” Premier Clark said in a statement following Horgan and Weaver’s news conference yesterday.

Professor Nelson Wiseman, Director of the Canadian Studies Program at the University of Toronto, says it is up to Clark to make the next move.

“Will she resign or call the legislature into session to present a speech from the throne?” Wiseman said.

“I suspect she will do the latter, be defeated, and then be required to resign,” he continued. “Then the lieutenant-governor will likely call on NDP leader to form a government if he can assure her that a majority of MLA’s (members of legislative assembly) would support a government led by him.”

This is not the first time a similar agreement has been made in provincial politics, as with the alliance that took place in Ontario with the Liberals and NDP in 1985.

At that time, the Progressive Conservative Party had governed the province for over 40 years, until the 1985 election that ended Frank Miller’s majority Conservative leadership. That election left the party with only 52 seats, David Peterson’s Liberal party had 48 seats and the NDP, led by Bob Rae, had 25.

Peterson and Rae reached an agreement that saw the NDP support the Liberal minority government for two years. On June 18, 1985 the Conservative Party was defeated on a motion of no confidence introduced by Rae.