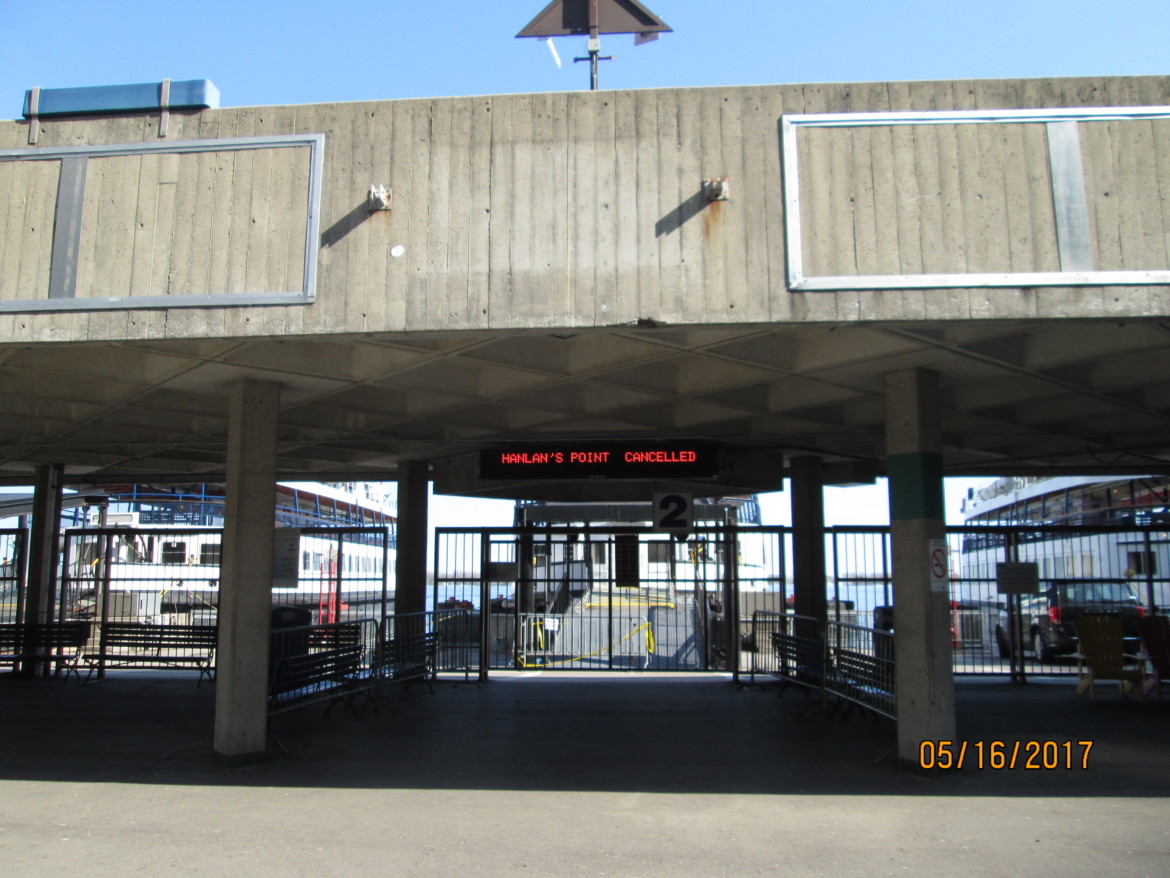 Businesses on the Toronto Islands worry about losing revenue and staff as ferry service remains restricted until June 30 in the wake of significant flooding.

Lake Ontario water levels are expected to keep rising, leaving the islands, a popular summer tourism destination, closed to the public for at least eight weeks.

“We may have to extract the animals tomorrow,” said Shawnda Walker of Beasley Entertainment which runs the Centreville Amusement Park, including a petting zoo featuring free-walking peacocks and an 300-pound pig named Charlotte. The animals have already been to moved higher ground, but may soon be taking the ferry to a temporary home on the mainland.

Centreville Amusement Park was set to open this weekend, and Walker says by delaying they’re missing out of 40,000 to 50,000 guests who typically spend the Victoria Day holiday at the amusement park.

Despite the delay, Beasley Entertainment isn’t worried about lost profits as much as the 300 youth workers they usually employ who may seek other work.

“We have a great team that comes back every year. We may have to train new people and it would be a shame to start from scratch in that regard,” said Priya Rao, whose parents own the bike rental shop.

“We’ve lost the first two months of our business, we’ve only had one day we’ve managed to be opened this season so far,” said Rao.

Rao and her family welcome most of their guests in July and are looking forward to a strong July and August season.

The delay adds to an already dramatic season for Rao’s family, who nearly lost their contract on the island park earlier this year. Eventually gaining it back after a rival bidder backed off following community outcry for the Rao family.

“We actually sold about 80 per cent of our stock. We had to replenish everything once we were told we were given back our contract. We are still waiting for some of the tandems (but) we haven’t been able to accept the shipment because of the flooding.”

Unlike Beasley Entertainment, the bike rental shop won’t be opening before June 30.

“For us it doesn’t make sense if city planners don’t feel its safe to bring people over to the island. We will follow their lead,” said Rao.

Centreville however, is keeping its options open.

“We’re taking it on a week-by-week basis, but we are planning on opening before June 30,” said Walker.

For those keen to see the island on two wheels, Rao recommends following the rental shop’s Facebook page.

This is the first time in 50 years Centreville will delay its season opener.

Concerns about islands are resonating at city hall as well.

“The park is a hugely valuable for our people who live in Toronto, and also for tourists. We just have to make sure we take care of it and people are safe when they are allowed to go there,” Mayor John Tory told reporters on Tuesday.

Meanwhile, the Rectory Café near Wards Island is open for business as usual. The company’s website features a message in capital letters explaining to guests they can still use the ferry to reach the popular snack spot if they simply notify crew members.

The Jack Layton Ferry terminal remains empty except for some disheartened visitors being turned away.

“We had this trip planned for our whole afternoon, now we don’t know how to spend our time in Toronto,” said Talia Singh, 42, visiting from Detroit.

Singh and her family were hoping to spend a sunny afternoon on Centre Island, before the crowds came for the season opening of the Centreville fair ground this weekend.

Singh and family look to make new plans after finding out they can’t visit the island today.

Flooding is also causing local events to be displaced. Music festivals, weddings and a dragon boat regatta are all looking for new venues on short notice as the city has also cancelled all camping and event permits until June 30.

Uncertainty remains with water levels expected to continue to rise, even without additional rainfall.
“Some of the water’s coming up through the ground, some of it is the result of wave action and wind,” said Mayor John Tory.

For those seeking relaxation under the sun, Tourism Toronto spokesperson Krystal Carter recommends taking the Queen streetcar 15 minutes east to the Beaches neighbourhood.