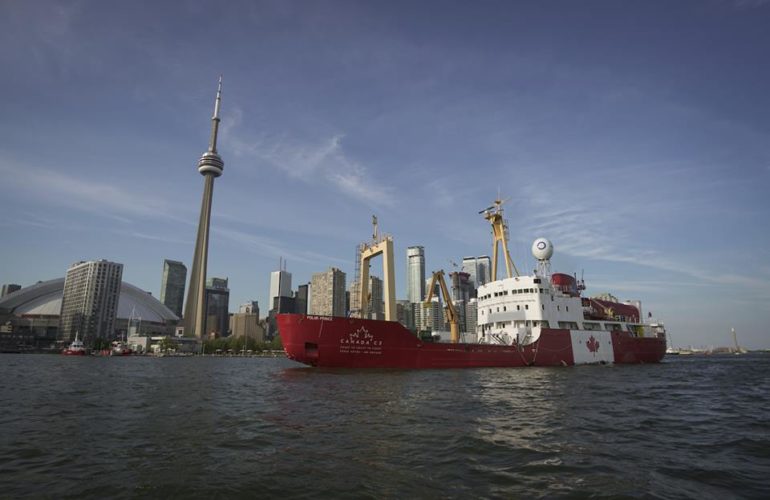 Scientists, chefs and everyday Canadians are preparing to board for an epic journey, sailing from Toronto to Vancouver through the Northwest passage.

The 150-day, 12,000 nautical mile voyage begins at 8:30 p.m. on June 1, with the public invited to wave the expedition goodbye from Toronto’s HTO Park near Queen’s Quay and Spadina Avenue.

“One of our goals was to have a real representation of the diversity of Canadians on this ship. We’ve been planning this for months and some have been on this project for years,” said Felicity Feinmen, a member of the C3 team, who will be posting the trip on social media.

The trip will be divided into 15 legs with more than 300 Canadians are set to board throughout.

The expedition will use the Northwest passage to curb the countries north coast.

Participants include Indigenous elders, scientists, academics, as well as ordinary Canadians joining for a single leg, Feinmen said.
The venture is also a major research opportunity for the scientists on board, he said.

Meredith Brown is the chief scientist for Leg 1 of the journey. In her ordinary life, Brown is the river keeper for the Ottawa River, which she works to protect by assuring environmental laws and regulations are respected.

“The expedition is super interesting. Along the way we are collecting research for 25 different projects,” Brown said.

Her role as chief scientist will be to inform those on and off the ship about the expedition’s research projects.

“It’s going to be an incredible time to talk about fresh water in Canada and how it connects all of us,” Brown said. “I think of this as a voyage of discovery.”

The expedition issued an open call for Canadians to apply to join. Feinmen said the goal of open applications was to make the project a platform for discussions about what Canada has been in the past, where the country is today and where the nation can go in the future.

“I didn’t even tell my husband I applied, because I thought it was a snowball’s chance in summer,” said Johanne

Johanne McInnis form New Brunswick will be travelling to Toronto to board for the first leg. (Canada C3)

McInnis, of Saint John, N.B., who works with youth in social services.

She said she was feeling complex emotions two-days before departing.

“For me it’s nervousness and anxiety, but also I’m excited and grateful, it didn’t hit me until I got my flight notification, [to head to Toronto to meet the ship] that this is really happening,” McInnis said.

The Canada C3 expedition (named for it’s journey from coast to coast to coast) is focused on connecting Canadians around the venture’s key themes: diversity and inclusion, reconciliation, youth engagement and the environment.

To follow the voyage, Feinmen will be hosting a Facebook live every day, highlighting the events happening everywhere the ship docks.