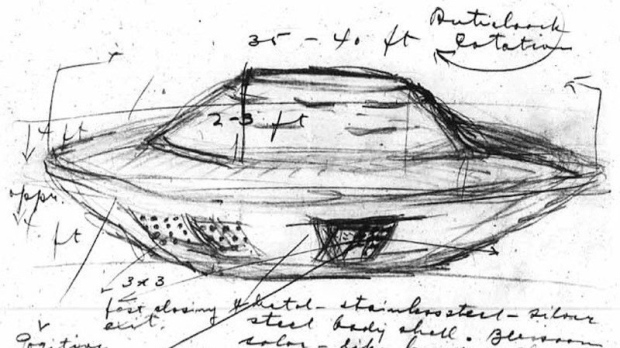 A handout photo of a sketch of a UFO reportedly observed in Falcon Lake, Man. in 1967 (CTV News).

The 2016 UFO Survey released this week revealed 1,131 sightings of UFOs reported in Canada.

And experts suspect although more than 1,100 sightings were reported, they suspect many more were not.

“There numerous sightings around the world, and out of those sightings, a small percentage will report them, and out of that the reports will be divided between organizations,” said Ryan Stacey, Ontario’s Provincial Director and Chief Investigator with the Mutual UFO Network, one of the oldest UFO-investigative organizations.

For the first time in the study’s 28-year history, just four per cent of sightings reported couldn’t be explained.

“This is likely a result of more careful scrutiny of raw report information available,” the study produced by Winnipeg-based Ufology Research states.

The provinces with the most people had the most reports. Quebec reported 38.5 per cent of the sightings, while Ontario had 26 per cent and B.C. reported 17 per cent.

Last year’s leading shape of UFOs that were reported was a point-source of light, which accounted for 57 per cent of sightings. Others included triangles, boomerangs, cigars and fireball-shaped objects.

The study archives detailed “sightings” from all over the country, including more than 50 in Toronto.

A commercial aircraft on a routine flight over the city on Nov. 14 last year had a “near miss” with an object, the reported stated. It was suggested to be a drone, although it was noted drones couldn’t fly that high.

The study said the Transportation Safety Board said “the incident will remain identified as a near collision with an unidentified airborne object.”

Other close calls include a man who encountered a six-foot-tall, long fingered, white alien in his bedroom in Cornwall, Ont., on Jan. 10. He said he talked to it and then it disappeared through a wall. The witness reported this to the Mutual UFO Network.

That same night, another man in Cornwall reported seeing a white light and then suddenly being in a field. Soon after, the witness said he was in a bath with three “greenish, big-eyed humanoids.” He said he had strange marks on his body and his eye colour changed afterward.

On Sept. 9, a Manitoba man reported he observed a bright light while sleeping, accompanied by an itch in his throat. He says he also “became a vegetarian immediately afterwards.”

Other reports weren’t as dramatic. One reported an alien stole his sunglasses, while another simply said they were contacted.