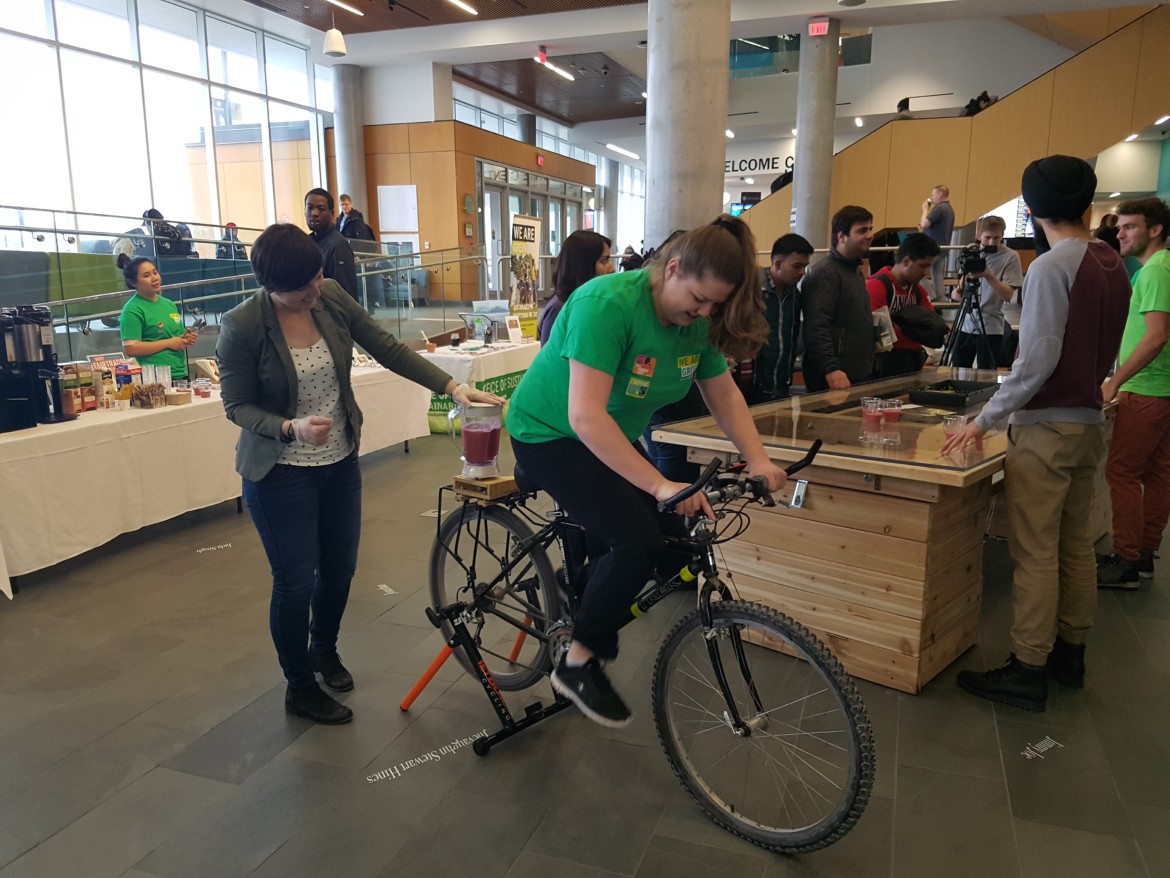 The market at the Learning Resource Centre displayed a few initiatives of the college’s sustainability department, as well as several information booths. On display was a bike that when peddled blended smoothies and a see-through hydroponics table actively growing herbs like mint.

While the bike was purely for entertainment, the hydroponics study table is something that has hopes to replace tables throughout the school, says Roma Malik, Acting Sustainability Manager.

“It’s a self-sustaining table where the students in the sustainable energy student lounge can use it as a study table but also they can grow herbs and vegetables out of there that will eventually be used by the HRT culinary programs,” Malik said.

She said she’s pleased with the turnout despite the event happening on a Friday morning.

“For a Friday just before exams, I think it has brought a lot of positivity,” Malik said. “Obviously the free coffee and tea and little chocolate samples are a good draw, but there is a tremendous amount of attention for the student project as well.”

One booth at the innovative market was hosted by Humber beekeepers John Coffman and Fran Freeman. They tend to multiple beehives at both the North and Lakeshore campuses, as well as at the Arboretum.

Coffman said people are becoming very aware of the decline of the honey bee population, but not everybody knows about the bees native to Canada and their importance.

“This also draws attention to the local, native bee, which there are about 250 different kinds in Toronto,” he said. “They are not as obvious as honey bees because they do not live in colonies, they live as individuals.

“So I think there is an ongoing effect of being aware of honey bees, but maybe people are now becoming more aware of what’s happening to the native bees as well,” Coffman said.

In addition to spreading the word about the importance of honey bees, they practice organic beekeeping techniques. Coffman says string is used instead of wax honeycombs and the bees create their own honeycomb naturally.

“This is raw, unpasteurized honey,” said Coffman, pointing to a jar of honey set out for taste samples.

“Some of the honey you buy off the shelves is processed,” he said.

“It’s highly filtered, it’s heated and it destroys some of the enzymes and things in the honey that are really good for you,” Coffman said.

Malik said she couldn’t ask for anything more in terms of support and open-mindedness she’s received.

“We are glad the community is so engaged and all the students are so engaged and willing to try new things in sustainability, and to see how they can reduce their impact,” Malik said.