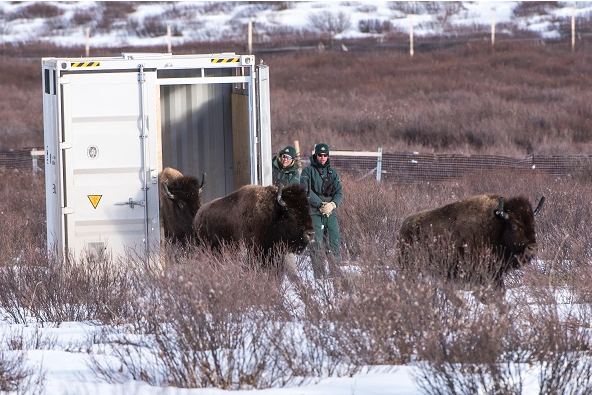 After a little over a century and two decades of research, analysis and public engagement, 16 plains bison are now roaming part of Banff National Park.

The bison from Elk Island – east of Edmonton – were first transported by trucks in shipping containers then air lifted by helicopters to the park, which is west of Calgary.

Marie-Eve Marchand, coordinator of Bison Belong, said the project was created as a social movement for people to question why bison are no longer part of the ecological system of the park.

“It’s an amazing project (because) it’s humans doing their best for nature,” she said.

Parks Canada will monitor the bison for the first 16 months. Then, around the summer of 2018, the animals will be released into the entire wild of the park to interact with other species and be the keystone player in the ecosystem.

“We have been missing in the system the tough grazer, our keystone species to keep the prairies and the grass land moving together,” said Marchand.

Harvey Locke, a conservationist, writer and trustee for the Eleanor Luxton Historical Foundation in Banff, said “keystone species in ecology shape the landscape and have an impact on it that benefits many other species.”

The idea of reintroducing wild bison to the park started in the 1997 Banff National Park management plan.

After 10 years of “research and analysis and 10 years of public engagement” there are now wild bison in the park.

“I think it’s one of the greatest things that’s ever happened for wildlife conservation in North America,” said Locke. “Their presence will be felt in the landscape again.”

“Knowing about the bison is knowing a bit more about our Canadian history, and it’s about knowing more about what does it mean to live in the prairies to have this strong iconic species,” said Marchand.