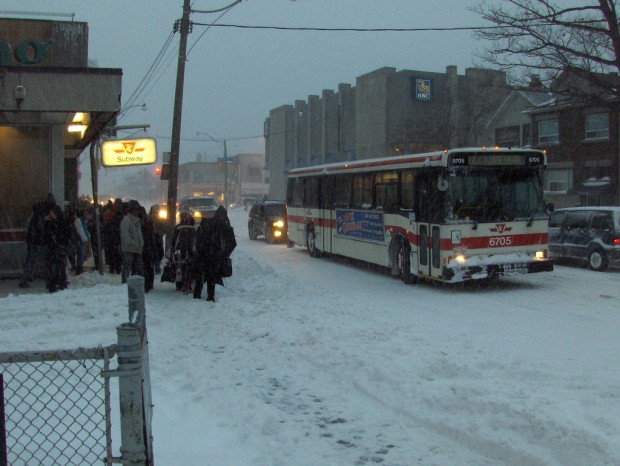 Toronto’s mild winter weather so far may have residents unprepared for the incoming storm. Environment Canada is predicting up to 10 cm of snow in this afternoon’s storm in the greater Toronto area.

Environment Canada says an Alberta Clipper is travelling through the Southern Ontario region this afternoon.

The storm is anticipated to create commuter havoc on roads during the evening rush hour the most. Meteorologist for Environment Canada, Desjanelle Matthews, suggests the snowfall may lead to delays throughout Toronto.

“We’re still expecting somewhere between 5 to 10 centimetres total for the area but only a few centimetres of snow that will have fallen before rush hour traffic begins,” says Matthews who specializes in severe weather.

Matthews also says that the snowfall is expected to end by midnight tonight.

Students that spoke with Humber News today talked about their concerns with driving conditions this evening.

Although the snowfall is expected to hit the GTA equally, Matthews says it will impact those traveling through the city the most.

“The more urban areas will be more impacted only because there’s more traffic,” says Matthews. “If you plan to drive in the snow, just take your time, slow down, drive according to the conditions. Know that it could be a little bit slippery out there and that going will be probably be slower, so leave yourself some extra time.”

The predicted weather conditions  made an immediate impact on air travel. According to torontopearson.com, several flights have been cancelled or delayed. Westjet and Air Canada are among the airlines who have cancelled trips to the Maritimes and the Prairies.

A few flights leaving from Pearson to New York City today have also been cancelled or delayed.

This Friday’s weather caps off a wild week for Toronto. Tuesday’s weather alert led to freezing rain and now a snow storm might be blanketing the GTA.