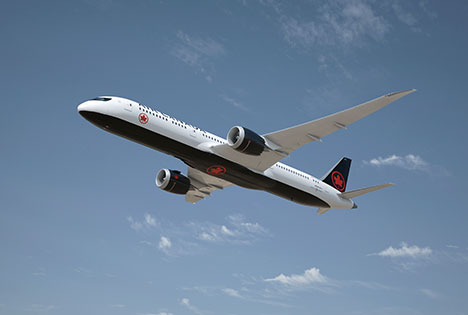 Air Canada is sprucing up it’s traditional red and white image, a new look that passengers and a marketing expert agree looks sharp.

Brendon Bellerose, a frequent Air Canada passenger, likes how the airline added black to their planes and uniforms.

“I feel like it’s a great upgrade to the airline,” said Bellerose, a pastry chef in Toronto.

“Since my favourite colour is black, it makes me fall in love with the new uniform even more,” he said.

Another frequent flyer, Caleigh McQuade, says that the black accents will make the plane and uniform more recognizable.

“I think it’s important for such a well-established airline to celebrate its roots and the colour looks great,” said McQuade,  a fourth-year student at University of Wilfred Laurier.

Robin Ritchie, Carleton University marketing professor said he didn’t like the new look at first , but appreciates why Air Canada decided to change.

“Air Canada has to compete with not only the Middle Eastern carriers,but European carriers as well,” said Ritchie, comparing the new colours to British Airlines and Swiss Air.

“Europe is trying to sharpen their own carriers by improving the quality of the in-flight experience and their products.”

Ritchie added that from a marketing standpoint, it is very important to deliver an outstanding customer experience and to have a clear brand that people will remember and find appealing.