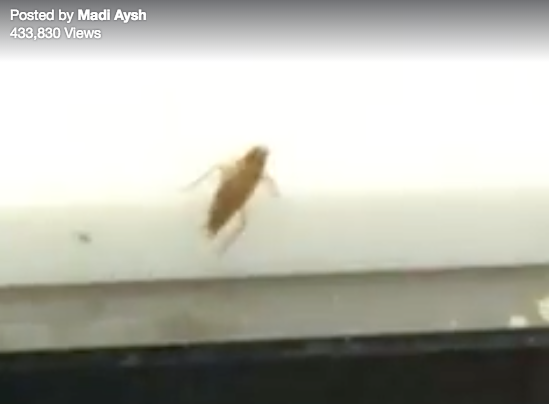 A video that appears to show a cockroach crawling out of the Mucho Burrito food station at the Humber College north campus has gone viral, leading to an inspection by Toronto Public Health.

AlMadina Ashfaq, a first-year communications student at Humber College, posted the cockroach video to social media over the weekend following the recent norovirus outbreak at the school. The video was shot on Dec. 22, 2016, and now has more than 430,000 views on Facebook.

There is no indication that the cockroach incident is related to the norovirus outbreak, which took place at Humber  residence last week and caused more than 200 students to fall ill.

At the time, Ashfaq only told the cashier about the cockroach because she did not want to pay for the food.

“I told [the cashier] I saw a cockroach and she told me to pay and then I showed her the video and she just got quiet and said okay I don’t have to pay,” Ashfaq said.

Confirmed to be cockroach

Avery Addison, regional manager of Addison Pest Control, confirmed in an email to Humber News the insect in the video is an adult German cockroach, which can carry a virus.

“It is true that cockroaches can be vectors for disease and germs including salmonella and many others,” Addison said in the email. There have been no reported cases of illness related to last year’s cockroach incident.

Addison said the cockroach could have been carried by a customer in a bag or books, and may not be an established infestation.

Mucho Burrito is run by Chartwells, the company that is responsible for the majority of the food service on campus. Stephanie Baxter, communications director for Compass Group, the parent company of Chartwells, said although they cannot be sure the video was taken in their cafeteria they have taken steps to reassure students that the food is safe.

Although Baxter said Chartwells cannot confirm that the video was taken at the Mucho Burrito at Humber College, these images compare the food station in the video and the campus Food Emporium:

“We’re aware of the video and we certainly have made sure that Toronto Public Health is aware as well and any follow up in terms of food inspection that needs to happen they are coordinating,” McMillen said.

Michael Finklestein, associate medical officer of health with the City of Toronto, confirmed the video has been passed on to the city’s food safety inspection program.

“We responded by doing that walkthrough of the location yesterday and today a full inspection is underway,” Finklestein said.

Currently, there is no correlation between the mysterious illness outbreak and the cockroach at the Food Emporium, however Baxter said Chartwells has implemented an action plan to reduce the number of students getting sick on campus.

“We’ve shut down all self-serve areas and turned them into ‘we serve you’ areas,” Baxter said.

Chartwells has changed their cutlery station from an open bin of individual plastic knives and forks to pre-wrapped sets. Baxter said the staff is being put through refresher courses on quality assurance, and that they will also get a daily health check.

“We recognize we are part of this community, and we want to be a part of the solution,” Baxter said. “We’re working with the college and cleaners to make sure we can move this forward.”

With files from Ruth Escarlan and Caitlin Patrick