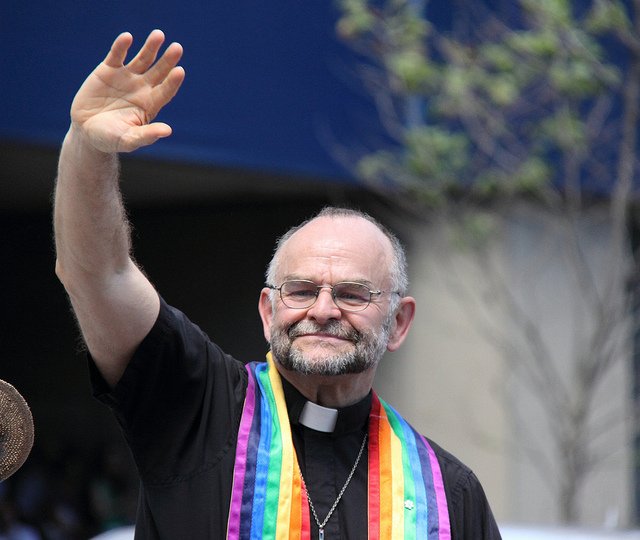 Brent Hawkes, a leading Canadian LGBTQ activist and pastor, has been found not guilty in his trial for gross indecency and indecent assault in Nova Scotia.

He was acquitted by Judge Alan Tufts, who said that although the plaintiff in the case gave “vivid testimony” during trial, it was contradicted by other evidence and the testimony was not reliable enough to support criminal allegations.

Judge Tufts also said that while he didn’t fully believe all of Hawkes’ testimony, the onus was on the crown to prove its case.

Outside the court, Hawkes aid he was very grateful for the verdict, and thanked his lawyers, friends and family.

“I am so glad that this is over, so that I can return home, and serve my church and my community as best I can,” said Hawkes.

Hawkes didn’t stay for questions after his statement.

Doug Elliott, Chair of the Brent Hawkes support fund, told reporters that the case should never have been brought to trial due to the weak evidence.

“As the judge said, in the summary of his ruling, it’s not clear what happened that night, and that is not the case that ought to be brought to trial,” said Elliott.

“We hope that the taxpayers of Nova Scotia won’t have to be burdened with any further expense with respect to this unwise proceeding.”

Hawke’s lawyer, Clayton Ruby, said that Hawkes was stressed due to the allegations.

“It’s a horrible stress, but he has come through it, and I am pleased for him,” said Ruby.

During the trial, the court heard that 40 years ago, in the mid 1970’s, Hawkes forced a 16 year old boy to have oral sex with him at a party. Hawkes was a high school teacher in Nova Scotia at the time, and the plaintiff was student.

Hawkes pleaded not guilty, and denied the allegations when he took the stand in his own defense in November.

Hawkes is a prominent figure not just in the LGBTQ community, but across Canada. He was appointed as a member of the Order of Canada in 2007, and was formally inducted in 2008.

Hawkes has served as a senior pastor at the Metropolitan Community Church of Toronto (MCC) since 1977. The MCC provides fellowship to the LGBTQ community.

Hawkes has also taken part in anti-racist initiatives, advocating for female priests, and working towards bringing attention to poverty and poor housing.

Hawkes gained national attention in 2001 when he officiated two same-sex weddings at the MCC, which ultimately led to court challenges that ultimately made same-sex marriage legal in Canada.