Protestors clash with police and civilians during inauguration 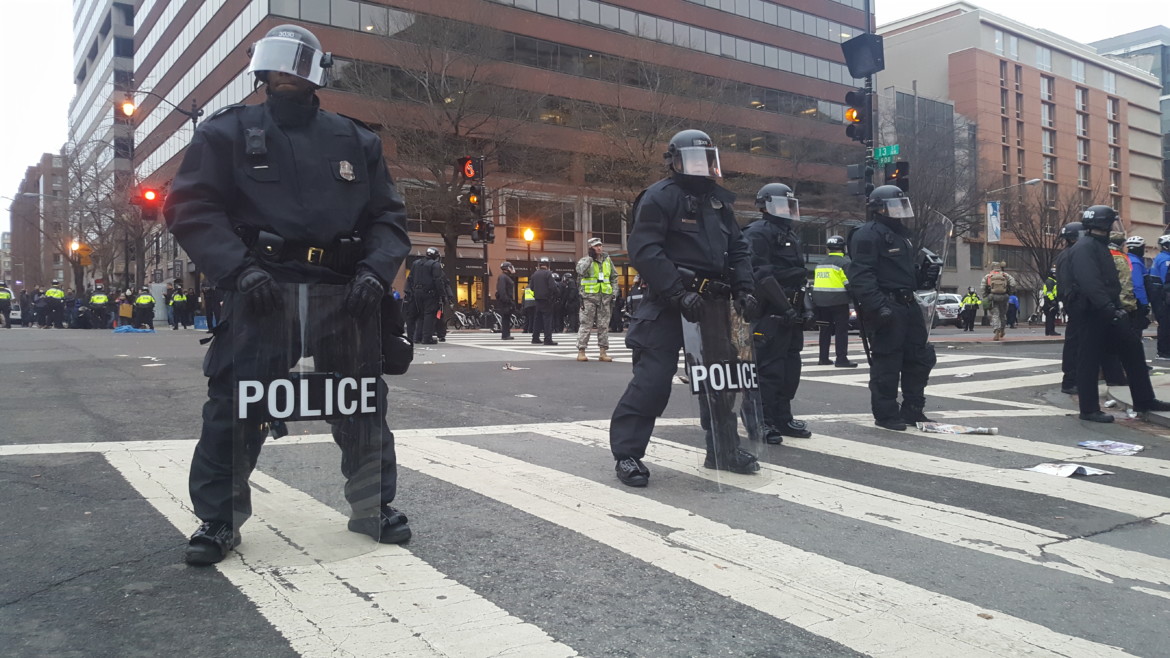 Police in riot gear block off the road from protesters in downtown Washington, D.C. on January 20, 2017. (Humber News)

WASHINGTON — Donald Trump’s inaugural parade was delayed nearly an hour while police dealt with protestors on the streets of Washington.

At the corner of 13th and K, tear gas, concussion grenades, pepper spray and flash bangs were used by police to disperse demonstrators.

A fire breaks out as people continue to protest the inauguration of President Donald Trump in downtown Washington, D.C. on January 20, 2017. (Humber News)

Pepper spray was also in the hands of civilians. Humber News spoke to a Trump supporter who said he had been pepper sprayed by a protestor dressed completely in black.

The man said he had his “Make America Great Again” hat stolen by a protestor and when he pursued the person he had to wrestle with a few others in the street and was pepper sprayed in the process.

The Trump support had an orange substance dripping down the right side of his face when he talked to Humber News.

“I don’t know what this stuff is, its never happened to me before. But I wasn’t going to let him take my hat,” said the man who asked to remain anonymous.

Another protestor told Humber News that more than a dozen people were injured by police efforts to disperse the demonstrators.  He said he saw a man who was hit by shrapnel from the concussion grenades and bleeding from the face. He also said there was no violence taking place when the situation escalated.

The burned limo from earlier protests on 13th and K. #Inauguration pic.twitter.com/S8p8YcR8Ok

Protestors on K Street offer snacks to the Riot Police outside the @WashingtonPost #Inauguration @HumberOnline pic.twitter.com/f1o44ueOks

Anti-Trump protest groups have been verbally and physically clashing with Donald Trump supporters in Washington all day.

The National Guard, F.B.I., military personnel, Secret Service and police officers have been trying to secure the city throughout the inauguration ceremony and celebration.

Windows were shattered down New York Avenue and a car was set on fire at 13th and K.

A shattered glass from a rioter in downtown Washington, D.C. on January 20, 2017. (Humber News)