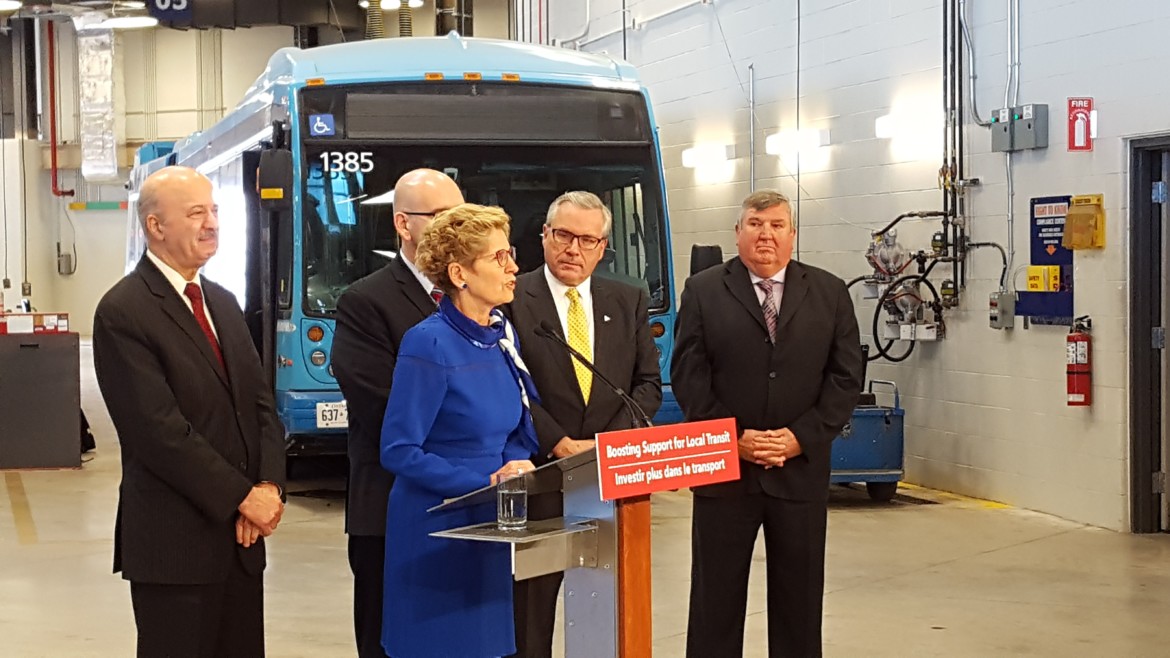 Ontario Premier Kathleen Wynne said Friday that her government will not support Toronto’s plan to impose road tolls on the Gardiner Expressway and the Don Valley Parkway.

“The province is not supporting plans for municipal road tolls at this time,” the premier said in a written statement, quashing a plan Toronto Mayor John Tory has been working on for months.

Instead of allowing the road tolls, Wynne’s government is doubling the municipal share of the existing provincial gas tax.

Wynne is promising that by 2022 the municipal share will increase to 4 per cent from 2, with an average yearly increase of .5 per cent.

The premier promised this would not increase the price of gas at the pumps.

Overall it will mean $31.5 billion dollars for transit infrastructure across Ontario.

“People in communities across Ontario can’t afford to waste time stuck in traffic — we all need better options to get to work and home to our families sooner,” said Wynne, during the news conference at the York Regional Transit depot in Richmond Hill.

“Certain conditions must be in place,” Wynne elaborated, saying that for her to allow tolls,  that would give commuters the option to use the toll roads or take an alternate route.

Minister of Transportation Steven Del Duca also spoke during the news conference and said, “by modernizing Ontario’s gas tax program we are helping municipalities improve their local transit service so people can easily get where they need to be.”

“That (denying tolls) is something that is not going to allow us to move forward in the way that we need,” Mayor John Tory said in a separate news conference Friday at city hall.

He remained positive towards Wynne saying “my relationship with Premier Wynne is a strong and open relationship.”

Tory, however, appeared frustrated while taking questions and said, “if they want to adopt a regime that sort of says we’re not allowed to raise money in this way or that way then we expect they be forthcoming with a lot more money.”

In November, Tory announced the plan to introduce road tolls to address what he called a growing traffic nightmare.

“The number one fix is to give more people transit options so they can get out of their cars,” he said.

“If we are going to tame the traffic beast, especially in light of our expected growth, it means starting to collect funds today for crucially needed transit for tomorrow.” Tory continued.

The toll would have helped lift the burden off Toronto taxpayers who were essentially paying higher taxes so subsidize commuters from outside the city.