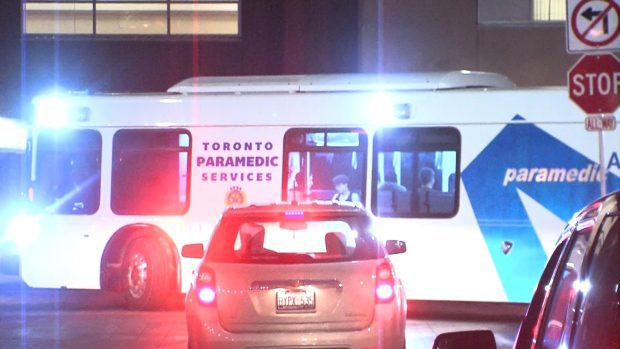 Humber College says a mysterious illness has affected 200 students at the school’s north campus, an increase from the 77 cases reported last week.

The college is still open and classes will proceed as Toronto Public Health continues to investigate and test samples.

Public Health officials are waiting for lab results to confirm whether the cause of the illness is food poisoning or a virus.

Students who have been ill are being asked to complete an online public health survey to assist Toronto Public Health with their investigation.

Humber College said it is critical that students who are feeling ill do not attend campus activities, including classes, until they have been free of symptoms for 48 hours.

Students first reported feeling abdominal pain and vomiting early Thursday afternoon, with the symptoms requiring ambulances for many by 9:30 p.m.

First-year student Michelle Vukobrat started feeling sick around lunch-time on Thursday and was vomiting by 2:30 p.m.

“She could barely walk to the car. It was non-stop and painful,” said Kathy Whitfield Vokubrat, who picked her daughter up that night from the residence and took her to back home to Mississauga.

Kathy Vukubrat has written a letter to Humber CEO and President Chris Whitaker expressing her disappointment about what unfolded, assuming it was food poisoning.

While Toronto Public Health and Humber College have not yet determined the cause of the problem, Vukubrat’s letter angrily criticized food preparation standards at the college and requested a refund for her daughter’s meal plan.

Dr. Michael Finkelstein, an associate medical officer of health with Toronto Public Health said in an email that the investigation includes contacting the hospital for information, and inspecting the food premise of the residence.

Jen McMillen said the reports of food poisoning cannot yet be confirmed.

“We have no information to suggest [food poisoning], but certainly we examine all options and concerns,”  said McMillen.

“We work with our campus food service partners to ensure that we are examining, investigating and addressing any issues that might be at play here,” she said.

Many residents are confused and concerned about large, sudden outbreak of illness.

“It was a little freaky because everybody was wearing masks and it kinda looked like a zombie apocalypse,” said Hunter Weeks.

Read: Food poisoning: How to protect yourself

Saige Eitman, a creative photography student who lives in residence, said she saw the distress first-hand.

“I was watching a guy yesterday, he was not happy. He is on my floor [of residence], he was very sick,” she said.

McMillen said the college is continuing to serve food despite the concerns.

“I’m not sure if any decisions have been made, but certainly we need to ensure that we work around containment as much as possible,” she said.

Second year Early Childhood Education student Lexa Castellan said she wants the school to do better for its students.

“That’s very unfortunate because [students] don’t have many other options so what are they supposed to do and what kind of steps are the school taking to investigate whatever happened there?”

The college issued a lengthy note urging students to practice effective hygiene and to get medical assistance if symptoms arise.

An update on the ill students at North Campus: https://t.co/477qVFcepj

The impact of the outbreak was shared on social media.

And more sick, including my daughter!! https://t.co/5cYVQgQGsl