‘This is our time,’ journalist says of Cubs’ World Series run 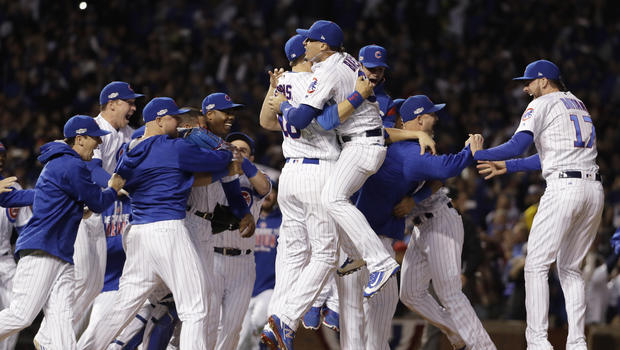 Chicago Cubs players celebrate after Game 6 of the National League baseball championship series against the Los Angeles Dodgers on Saturday in Chicago. The Cubs won 5-0 to win the series and advance to the World Series against the Cleveland baseball team. (AP PHOTO/DAVID J. PHILLIP)

In the almost three decades she’s been in Chicago, Linda MacLennan has seen Michael Jordan’s Bulls’ dynasty of the ’90s, the Bears celebrate a Super Bowl, the White Sox win in ’05, and watched the Blackhawks go from laughing stock of the National Hockey League to winning three Stanley Cups between 2010 and 2015.

But even for her, this year’s Cubs are unprecedented.

MacLennan, a journalist who moved to Chicago in 1987 after co-anchoring Canada AM for three years, has developed a love for the baseball team that’s embedded in her life.

After last year’s NLCS loss to the New York Mets, the Cubs inspired hope for their hopelessly optimistic fan, she told Humber News in an interview Tuesday.

“At the end of last season, it was heartbreaking,” MacLennan said. “But I think that’s what made a lot of people say ‘we do have the stuff.’ This is our time.”

Linda MacLennan’s grandfather, while studying to be a minister at Northwestern University, used this Chicago Cubs pass to get into Wrigley Field. 1931. (Provided by Linda MacLennan)

MacLennan, who worked at WBBM as an anchor and reporter, catches herself saying ‘we’ several times when talking about the Cubs.

Even for a respected 30-year veteran journalist, it’s impossible for the adopted Chicagoan to not embrace the fabled franchise.

It’s an organization without conceit, that embraces its history and lives by the motto, “there’s always next year.”

She mentions the lure of the Cubs and what the team means to fans. There are moments in her answer where she struggles to find words, saying it’s nearly impossible for an outsider sports fan to grasp the severity of Chicago’s 2016 post-season run.

“It’s easy to say it was 108 years ago that they won the World Series, but it’s almost dismissive of what that really means to a franchise,” said the former news anchor.

The bigger factor, she says, could be Wrigley Field, the iconic home of the Cubs.

“There’s just something, and maybe it’s Hollywood-ish, but there is something about walking into that stadium and where it’s situated, in the heart of the city,” she said.

“I think that’s part of why people react from the heart,” she said.

The hype and hysteria to come out of north side Chicago has taken over the sporting world, giving Major League Baseball and its television partners reason to celebrate historic ratings.

“There’s just something, and maybe it’s Hollywood-ish, but there is something about walking into that stadium and where it’s situated, in the heart of the city.” –Linda MacLennan

Nielsen Ratings saw Sunday’s Game 5 rake in nearly 24 million viewers on FOX, the most viewed baseball game since Game 7 of the 2011 World Series between the Texas Rangers and St. Louis Cardinals (25.4 million).

The Chicago Cubs need their stars to be on top of their game if they want to extend the World Series beyond Game 6 tonight in Cleveland. The Cleveland baseball team leads 3-2 in a best-of-7 series, but lost 3-2 in a tight Game 5 Sunday night at Wrigley Field.

“We’re writing our own history. We’re making history. Why stop? This is entertaining to us. It’s fun, and we live for this,” said Cubs shortstop Addison Russell.

Cubs manager Joe Maddon brought left-handed reliever Aroldis Chapman out for an eight-out save in Game 5, striking out four and stopping Cleveland from clinching their first World Series title in 68 years.

“When you have a guy like that,” said Maddon, “that can pitch that many significant outs in the latter part of the game, it’s pretty cool.”

Cleveland knows all about long-inning relievers.

Andrew Miller, the lefty who wasn’t used in Game 5, will be plenty rested and ready to go in case Cleveland calls upon him.

In the 17 innings Miller has pitched this post-season, the 31-year-old broke the Major League record for strikeouts by a relief pitcher with 29. To go with that, Miller has only given up four walks and eight hits in nine appearances.

Cubs 2014 first round pick Kyle Schwarber, who tore his ACL two games into the 2016 regular season, returned from injury for the World Series and has provided Chicago with depth in their batting lineup.

Slotted at designated hitter for Games 1 and 2, Schwarber had three hits, including a Game 2 single to centre field in the 3rd inning that scored a run.