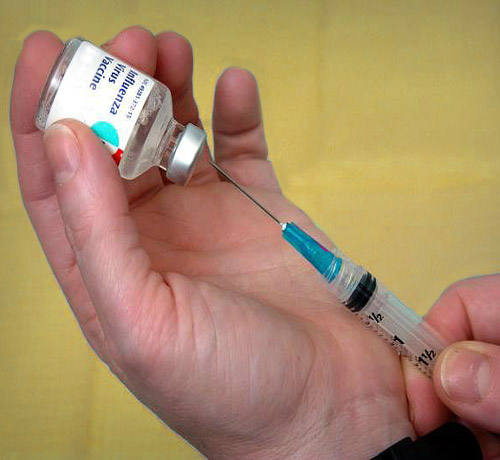 Flu shots are available for free at the Humber campus for all students. (Courtesy of Creative Commons: Fort Huachuca)

Some Humber students feel as though the flu shot isn’t necessary for a healthy lifestyle.

With the flu season starting people are being encouraged to get their vaccines.

But many are still wondering if taking the proactive decision to get the shot makes any difference.

For Humber student Ebony Richards who studies Paralegal Education it wasn’t a decision she got to make.

“I had to get it done [in order] to get in the country,” Richards said.

Recently new to Canada, Richards came a little over two months ago to pursue her career in law. But without the shot she said she wouldn’t have been able to come.

The Ontario government says that symptoms of the flu can include fever, cough, muscle aches, sore throat, headache and tiredness.

Meghie recommends the flu shot to help prevent it spreading, although she does acknowledge that people have concerns.

“Like every other medication there is the negative [aspects]. The flu shot is made on what the strain was the year before so everything is a year behind,” Meghie said.

“If there is an outbreak of the flu what tends to happen is the agency will remove [people who have not taken the shot] to avoid a spread.”

Meghie said she has experienced her own fair share of side effects but finds proactive ways to fix it.

“Before I take the flu shot I make sure I take a lot of vitamin C and I take two Tylenols. So I cover all the symptoms that I had when I have the flu shot,”

According to Statistics Canada almost one-third of Canadians aged 12 and over got the flu vaccination in 2014-15.

However, during that period Ontario was the one province where the rate decreased.

“I’ve heard a lot of [negative] reviews about it. I’ve heard that it doesn’t actually help and there are side effects,” Hussein said.

Although Hussein hasn’t got the shot personally he says he isn’t worried.

“If you’re sick you can always rely on home remedies such as fruits, vegetables and, teas. You can possibly get better without shots so [therefore] I don’t think it’s necessary.”

The chart below is a survey done by Humber News.

Humber College is one of the many school institutions that give flu shots for free.

“The vaccine will be available at doctor’s offices, local public health units and community immunization clinics. Anyone five years of age and older can also be vaccinated for free by trained pharmacists at approximately 2,600 pharmacies across the province,” the Ontario government said in a media release in October.