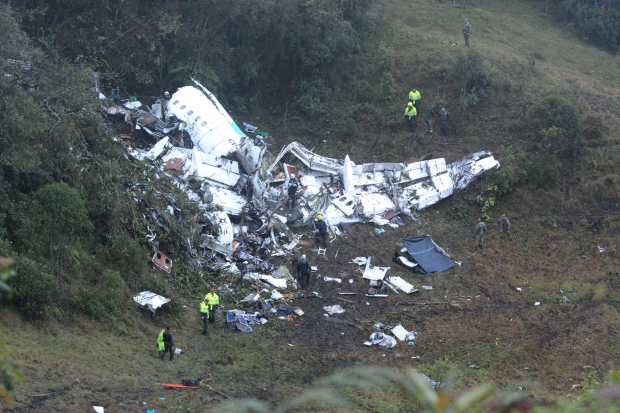 Only three members of the Chapecoense Football Club are alive after the plane bringing them to their biggest game in team history crashed in Colombia on Tuesday.

The crash happened in a mountainous rural area outside Medellin and killed 71 of the 77 passengers on board. Only six people survived. Four people who were listed on the flight, did not board.

As of Wednesday, 45 bodies had been identified according to Colombian officials.

Sources familiar with the investigation said there were audio recordings in which an onboard crew member told air traffic controllers, “The plane is in total electric failure and without fuel.”

Goaltender José Nivaldo Martins Constante, 42, best known as Nivaldo, was one of the four who did not board the plane. He had planned that the second leg of the finals be his 300th and final game for the team and did not join the team.

He retired the day after the crash.

“We never thought such tragedy could happen, but at the same time, we need to be strong and try to turn the situation around,” Nivaldo said at a vigil for the team held in the club stadium.

“It won’t be easy because our hearts are in a lot of pain,” he continued.

Apart from the three players, other survivors include a flight attendant, flight technician and a journalist.

The flight technician, Erwin Tumiri, said that he saved himself by strictly sticking to the security procedure as others were panicking. He told Colombia’s Radio Caracol that many passengers got up from their seats and started yelling.

“I put the bag between my legs and went into the fetal position as recommended,” said Tumiri.

Alan Ruschel, Hélio Zampier Neto and Jakson Follmann are the three players who survived the crash.

Goalkeeper Marcos Danilo Padilha was reportedly rescued alive but died later on. Ruschel suffered spinal injuries and has had surgery. Follmann had his right leg amputated and Zampier remains in intensive care with severe trauma to the skull, throax and lungs.

She wrote, “We are praying for everyone who has not yet been rescued, and for their families. It is a complicated and difficult situation. Only God can give us strength.”

Forward Tiago de Rocha Viera, 22, was one of the many players killed. A video surfaced the internet showing the forward’s reaction when he found out his wife was pregnant with their first child.

The team, from Brazil’s top league, was en route to face Atletico Nacional of Medellin in the first leg of Wednesday’s Sudamericana final, which is South America’s version of the Europa League. This was the first final of a major South American club competition that the team qualified for.

The governing body for world soccer expressed its condolences in a tweet.

FIFA’s thoughts are with the victims, their families, fans of Chapecoense & media organisations in Brazil on this tragic day. #ForçaChapepic.twitter.com/plDFRYqteo

The football club had qualified for the biggest game in their history after defeating the Argentine club San Lorenzo in the semi-final on away goals after two draws.

Rescue efforts were briefly delayed due to heavy rain.

The club will not be making any official comments until more information is received.

About 20 journalists who traveled with the team were also killed. Only one survived.

Aviation authorities said the charter plane declared an emergency and lost radar contact just before 10p.m. Monday (0300 GMT) because of an electrical failure.

Authorities aren’t ruling out the possibility that the flight ran out of fuel before crashing but the main line of investigation is a possible electrical failure, according to the head of Colombia’s civil aviation agency.

Here’s a video posted from Ruschel’s Instagram on the plane prior to the crash:

Following the crash, the South American football federation has suspended all games and other activities.

Many football clubs around the world including Barcelona and Real Madrid hold a minute of silence for those killed in the Colombia crash.

Bodies of the deceased are expected to arrive as soon as midday Friday and be directly taken to the club’s stadium for a collective wake.

According to Reuters, the Colombian team wants the trophy to be given to the Chapecoense in honour of the dead.