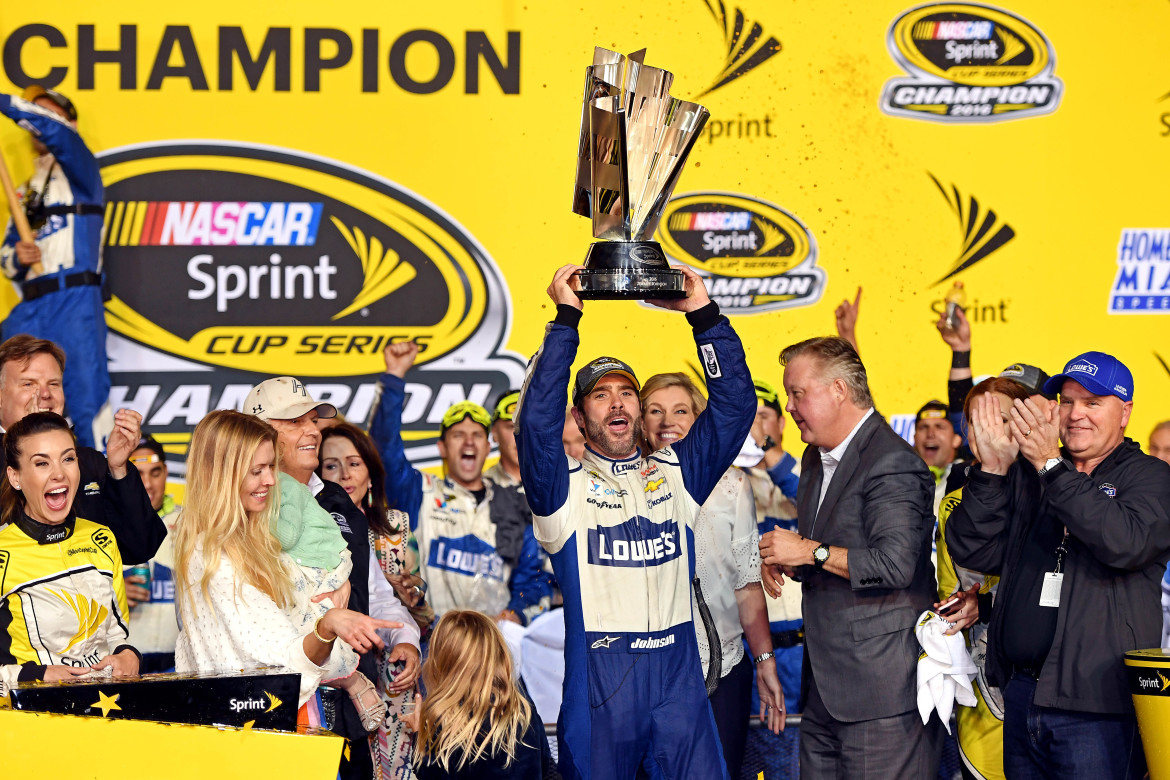 Jimmie Johnson has won his seventh Sprint Cup Championship title, tying him with Richard Petty and Dale Earnhardt Sr. for most over-all.

After winning five straight championships, 2006-2010 and his sixth in 2013, it was never a question of if but a question of when will he win his seventh tittle and add himself to the history books.

Many fellow drivers congratulated Johnson on this achievement, including three-time champion Tony Stewart, who celebrated his last race Sunday night. Johnson gave his championship helmet to Stewart as a memoir for his finally race.

What an honor that a 7time champ, @JimmieJohnson, would give you the helmet off his head after the race?? pic.twitter.com/0Vw7Ocb1Cc

Other drivers who congratulated the now seven-time champion on his victory were Dale Earnhardt Jr. who said “he wished his father ” Dale Earnhardt Sr. could have been there as well.

Happy for @JimmieJohnson. I wish dad was here to shake his hand. Woulda been awesome to see that.

Many Canadian NASCAR drivers were impressed to see a driver reach a seventh championship. 2016 NASCAR Pinty’s Series Champion Cayden Lapcevich said although Johnson wasn’t his pick to win, he is definitely one of the best.

“He has done so much for the sport of NASCAR, he never fails under pressure,” said Lapcevich. “No one will ever be as good as Petty and Earnhardt but Jimmie is definitely a role model to me.”

NASCAR Next member and driver of the number 59 in the Pinty’s Series, Gary Klutt said that Johnson’s win was good, hard racing.

“There were a lot of aspects that went into his win, a good car, good team, and natural talent,” said Klutt. “Jimmie’s determination proves that hard work can get you anywhere.”

In the heated battle at the Homestead-Miami track, the Championship Four all went head to head in the most important race of the season. What started out as a slow 268-lap race with very little cautions, quickly turned into one of the most intense battles for a tittle ever.

On lap 258, two of the Championship Four, Joey Logano and Carl Edwards, made contact during the late race restart, sending Edwards into the wall. This caused a domino effect in the pack leading to damage for Brad Keselowski, Kasey Kahne, Chase Elliott and many others, including Martin Truex Jr. whose car caught fire.

The wreck also ended Edwards hopes at his first championship.

The red-flag pause ended with less than ten laps to go in the race, but the caution came out again on lap 265 after Ricky Stenhouse Jr. made contact with the wall and sent the race into overtime.

On the final restart of the race, Johnson took the lead with the rest of the Championship Four in 5th and 6th place. Johnson soared ahead of the pack and with the checkered flag, took the race and his seventh championship.

Now the playing field is reset. There are no other active drivers, other than Johnson, with more than one championship under their belts. So the question remains, will anyone ever win seven championships again?

“There is definitely a possibility that guys like Eric Jones and Chase Elliott, who are just getting their feet wet, may win that many but no one will do it like Jimmie did,” said Lapcevich

Klutt agrees saying if you’re not trying to win races or championships, then you should find a different activity.

“Each era brings different challenges and different nuances that sometimes create or foster the opportunity for someone to win seven championships,” said Klutt. “The rules and formats change all the time and that determines how people go about winning a championship.”

Here is a look at all of the past NASCAR Champions.