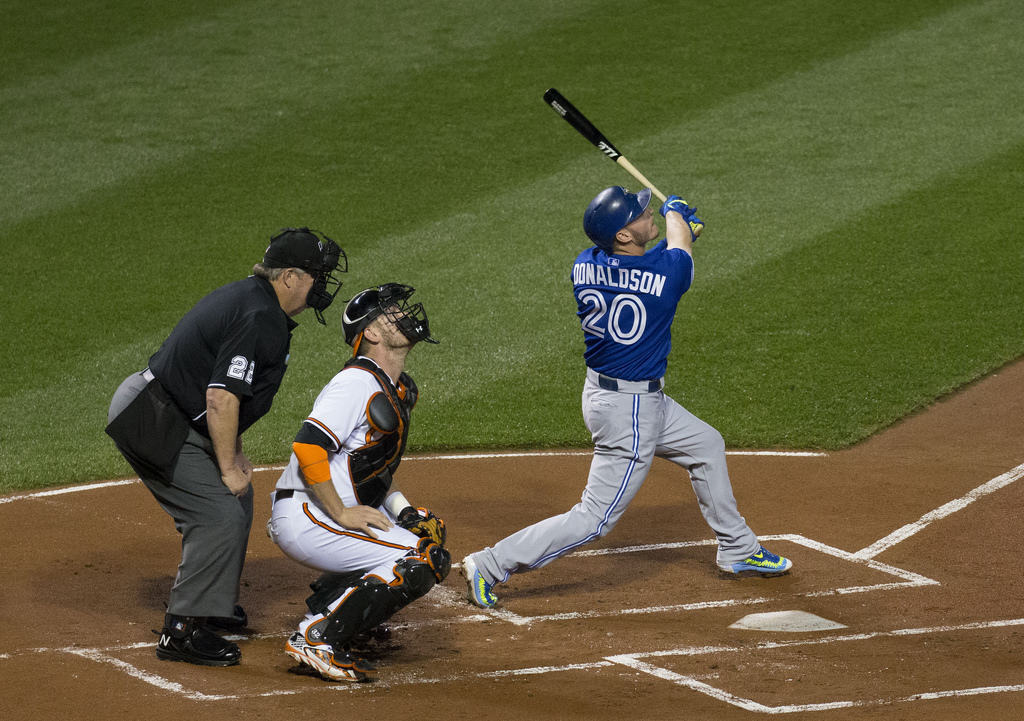 Aaron Sanchez gave the Blue Jays one of his best performances of 2016 on Sunday against the Boston Red Sox at Fenway Park. (Wiki Commons)

Toronto lost four of five games before beating Boston to secure the home-field advantage in the AL wild-card game. The season came down to the last regular season game which resulted in a 2-1 victory for the Blue Jays.

“Is it supposed to be easy?” said Blue Jays manager John Gibbons, when asked how he felt about this season’s path to the playoffs by Sportsnet reporter Barry Davis. “This is the big leagues, speaking for myself, the coaching staff, the front office, we couldn’t be more proud of (this) group.

“Maybe this is the way to go into the playoffs. A little battle-tested, taking it down to the wire, playing these kind of games at Fenway Park. We’ll be ready.”

The team celebrated with a champagne shower in the visiting locker room after the game.

Before earning a playoff-spot in the past two seasons, Toronto hadn’t made the post-season since winning the World Series in 1993.

“Is it supposed to be easy?” – Manager John Gibbons

Outfielder Michael Saunders, a native of Victoria, B.C., was six-years-old when he watched Joe Carter hit the title-clinching home run for the Blue Jays over Philadelphia that fall.

“This is my childhood dream,” Saunders told Sportsnet in the locker room post-game celebration. “In ‘93, that’s when I became a die-hard Blue Jays fan. To be a member of this team is quite the experience.”

Starting pitcher Aaron Sanchez, who carried a no-hitter into the 7th inning, finished his first season as a starting pitcher with a 15-2 record and an AL-leading 3.00 earned run average (ERA), smashing expectations for someone who, at this point last season, was the team’s eighth inning setup man out of the bullpen.

“I wasn’t ready to go home,” said Sanchez in a post-game scrum with reporters. “For it to come down to (game) 162, and me being out there…there was a lot at stake in that game. It was in my hands.”

With the Baltimore Orioles’ 5-2 victory over the New York Yankees, the Blue Jays will host their AL East division rival in the AL wild card game this Tuesday at the Rogers Centre. The winner will face the Texas Rangers in a best-of-five game series that will start next week.

The Blue Jays now head home to prepare for a one-game playoff with the Orioles. Baltimore had taken two of three games in Toronto last week, but the bluebirds had the overall regular season advantage, going 10-9 and averaging 5.1 runs-per-game compared to 4.3 for the Orioles.

Both the Blue Jays and Orioles posted 89-73 records, finishing four games back of the AL East division champion Red Sox.

Toronto secured a playoff spot after the Detroit Tigers lost 1-0 to the Atlanta Braves on Sunday, but defeating Boston gave them home-field advantage for the Wild Card game.

Devon Travis led the scoring with his 11th home run of the year, a solo shot off former Blue Jay and current Red Sox starting pitcher David Price in the 5th inning with two outs.

Tulowitzki hit the go-ahead run in the top of the eighth, lifting a drive over Red Sox second baseman Dustin Pedroia, cashing in Edwin Encarnacion and giving Toronto a 2-1 lead.