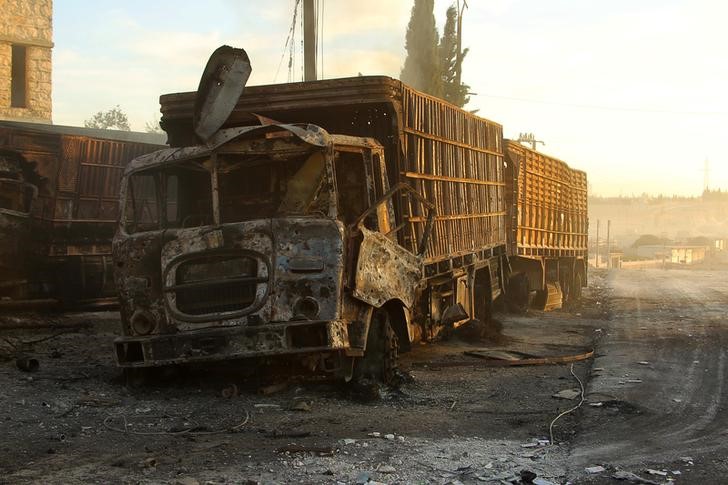 The UN called the attacks “sickening, savage and apparently deliberate,” in a statement Tuesday.

“The humanitarians delivering life-saving aid were heroes. Those who bombed them were cowards,” said the UN in a press release.

The Deputy spokesman for the UN Secretary-General, Farhan Haq said that in order to get back to work, aid workers need the right environment, which isn’t available right now.

“We would like to get back to work as soon as possible,” said Haq. “We need to make it clear, to allies and rebels that we need a lasting period of calm on the ground in order to help these hard to reach areas like Uram Al-Kubra.”

It is not clear who was behind the attack, but hours earlier, the Syrian military said the week-long ceasefire had failed.

The ceasefire was meant to deliver assistance for at least 78,000 people in the town of Uram Al-Kubra, west of Aleppo City.

The Canadian Red Cross, who works in close partnership with the Syrian Arab Red Crescent stated in a press release that the aid items that were destroyed were going to support civilians who desperately need it.

“We are both saddened and outraged by this latest attack in Syria,” it read. “Attacks on humanitarian aid workers and convoys are completely unacceptable, and come with serious repercussions for ongoing humanitarian operations.”

At least 18 of the 31 trucks in the convoy were hit while they were off loading at their local Red Crescent warehouse, which was destroyed as well.

In addition to the 12 UN and Red Crescent workers that were killed, at least 22 civilians are dead.

Amidst the score of media, the first family from Syria have landed safely. Hope that they will find a better home here in Canada. (Courtesy: Domnic Santiago/Flickr)

Prime Minister Justin Trudeau has said that in order to help people affected by humanitarian crises, Canada will spend an extra $64.5 million over the next several years.

He says he plans to increase the foreign-aid budget by 10 per cent to help get displaced children back in school.

Immigration Minister John McCallum said at the UN general assembly Monday, that at least 13 other countries, including Britain, are interested in adopting Trudeau’s refugee plan.

The World and Syrian refugees

In the recent event, including the bombings in New York and New Jersey, both U.S. presidential candidates, Donald Trump and Hillary Clinton have spoken out.

Trump has said he wants to halt the migration of refugees from Muslim countries including Syria.

Clinton has said that she would expand the refugee program that President Barack Obama started, to accept about 65,000 Syrian refugees.