Toronto Vs Everybody gets Indigenous T-shirt translation 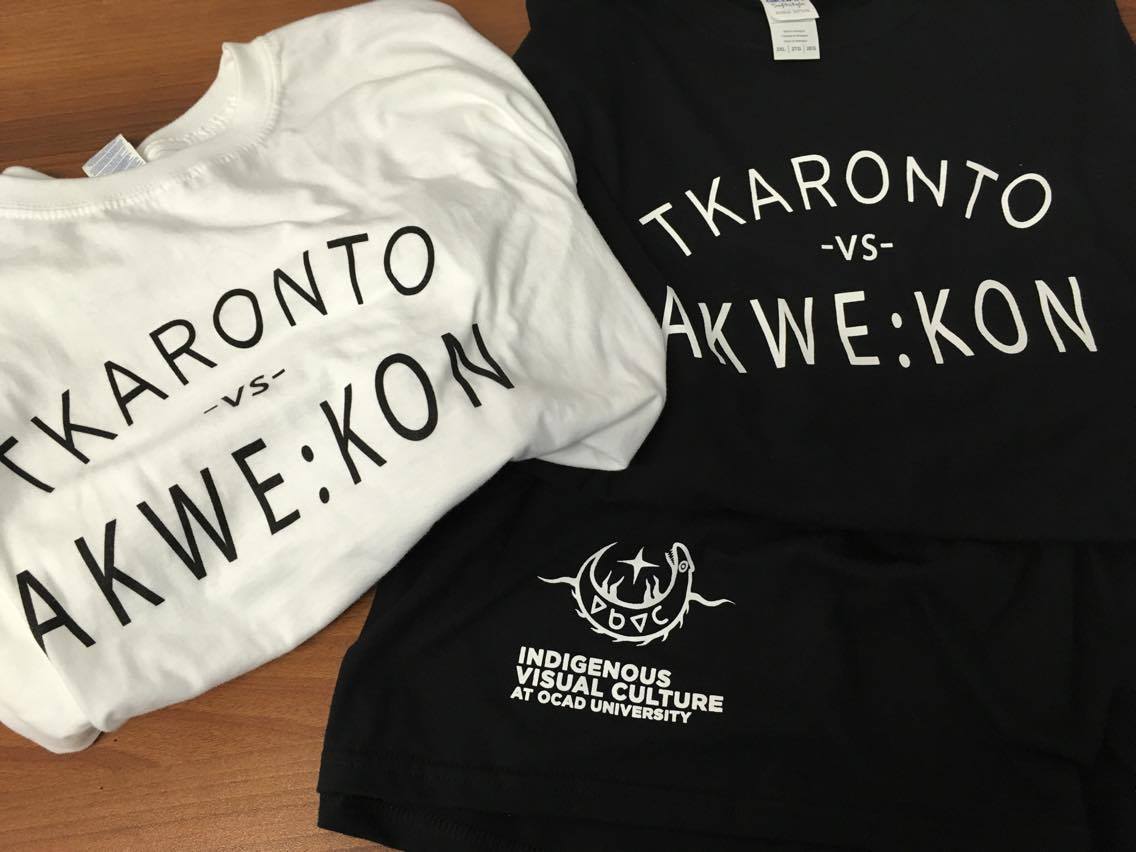 Black and white t-shirts are being sold at OCAD University in the Indigenous Visual Culture Office. (Courtesy Kaiatanoron Bush)

Indigenous artists are making their presence known with a take on the iconic Toronto Vs Everybody T-shirts written in the Mohawk language.

Students at OCAD University in downtown Toronto created 120 black and white shirts with the inscription, Tkaronto Vs Akwe:Kon.

Kaiatanoron Bush, a third year OCAD student in Indigenous visual culture, worked as the project lead in the creation of the shirts.

“It is super important for the Mohawk language to be recognized. People should learn the Indigenous language of the territory they are living in,” said Bush, who talked to Humber News about where the idea of making these shirts came from.

“Ryan Rice is the program director at OCAD University for the Indigenous Visual Culture Student Centre, and he proposed the idea. I thought it was great and decided to put the shirt together,” Bush said.

OCAD students began selling the T-shirts on Sept. 6, and they are in high demand almost completely selling out with only eight left in stock.

Shelley Charles, elder advisor on Aboriginal Relations and the Aboriginal Resource Centre at Humber College, believes that these T-shirts are an excellent addition to the Toronto community.

‘It is super important for the Mohawk language to be recognized’

“Any opportunity that we have to utilize our language should be done,” she said.

“As educators and students, to look for those opportunities where we can lift up our language, also helps us to lift up our voice and lift up this universal understanding and knowledge that we’re still here,” Charles said.

Aboriginal Liaison Officer at Humber College, Kelsie Johnston, is all for the T-shirts, as well as the new Toronto street signs being added with the Anishinaabe language. She believes that with the right recognition, the culture will not fade away.

“As an Indigenous culture and for any culture, we know that with loss of language comes loss of culture,” she said.

“The fact that Toronto comes from an indigenous word, there should be that cultural recognition and that language recognition. It’s great to see the visibility increase through initiatives like this,” Johnston said.