Shomi to shut down streaming service 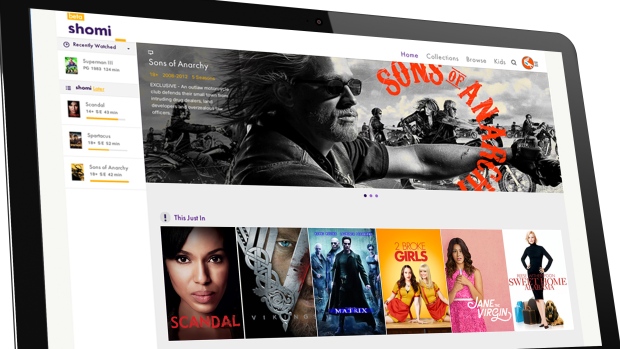 After two years, Canadian streaming service, Shomi, is shutting down as of Nov. 30 (Shomi)

Canadian streaming service Shomi will be shutting down at the end of November.

David Asch, Senior Vice President and General Manager of Shomi, said in a statement, the company is grateful to “Canadians who enthusiastically invited us into their living rooms and took us with them on their phones, tablets and laptops.

The business climate and online video marketplace have changed markedly in the last few years,” said Asch. “Combined with the fact that the business is more challenging to operate than we expected, we’ve decided to wind down our operations. We’re proud of the great service we created and the role we played in the evolution of Canada’s video landscape.”

Cue the Closing Credits. Unfortunately, shomi will be shutting down as of Nov. 30, 2016. These past 2 years have been amazing & we thank you

A sad day for us. Thank you to everyone sending us kind words.

Launched on Nov. 4, 2014 by Rogers and Shaw, Shomi brought Canadians many shows that aren’t provided on traditional TV and Netflix.

Shomi has many exclusive TV shows including American Horror Story, Jane the Virgin, Sons of Anarchy and the Emmy winning Mr. Robot. It also has more than 12,000 hours worth of TV shows and movies.

Not many Humber students that were surveyed on Tuesday were aware that Shomi is shutting down their services but those who did know, weren’t very surprised.

Christopher Coletta a Guelph-Humber student, said he could have predicted Shomi’s demise.

“When I first heard about Shomi I didn’t really think it could compete with Netflix because Netflix’s reputation was so high, everyone was already use to it, people were already subscribed to it,” said Coletta. “Why would we switch to Shomi, when we’re already use to the shows that Netflix has.”

Some students, though, were saddened to learn that their main streaming was being shut down.

Nicolette Dabey, a tourism and hospitality management student said she was upset to hear that she will be forced to watch Netflix from now on.

“I mean I’m kind of disappointed about it. Shomi is on my TV already, so I don’t need to worry about streaming something like Netflix. Now I have to go through the hassle of streaming everything,” said Dabey. “Plus I liked the selection on Shomi, I don’t like the Canadian Netflix too much.”