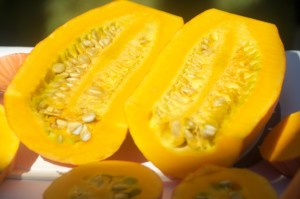 This squash was made from 800-year-old seeds. It was cut open in order to preserve the seeds to plant them yet again. (Photo by Natalie Dixon)

Humber College’s North campus hosted a ceremony on Tuesday to honour the harvest of an ancient squash.

The event at the Medicine Garden began with a traditional Native smudging ceremony and the laying of tobacco on the earth. The squash was then cut up by two senior Humber staff members, vice president Jason Hunter and Media Studies Dean Guillermo Acosta.

This sacred gourd was surrounded by two layers of fencing in the Arboretum. The inner fencing hosted signs that said, “Please Do Not Harvest Squash.”

Now, there are no squash to be found.

Some of the three squash were made into squash soup which was shared with everyone at the ceremony, while some of the seeds are being preserved to be planted in the future.

It’s like a historic land figure… You want to cherish it. – Humber student Ali Ibrahim

Humber’s Elder Advisor on Aboriginal Relations, Shelley Charles, said these seeds are from our ancestors.

“Back there, in our ancestor’s time, they thought about the future of the people, so they put these away for safe keeping and they buried them.”

Charles said this is the original source where all the squash came from. This specific plant species is almost extinct, she said.

Thes squash were cultivated by the Narragansett people which makes the ceremony very significant for the Aboriginal Resource Centre. Having an event like this brings people at Humber together and also acknowledges our indigenous plants, Charles said.

The ceremony highlights all the work that has been done over the year.

Ibrahim said he agrees with Charles that events like this bring people together.