Canadian Music Week: What to check out in the city 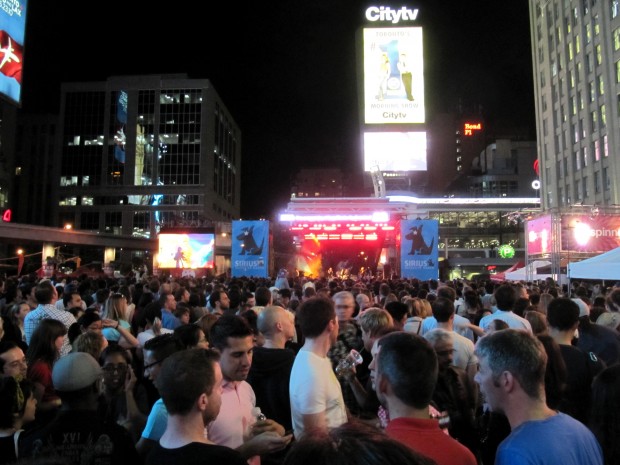 Hundreds of bands are descending upon Toronto from May 2-8 for Canadian Music Week, and it’s information overload deciding where to spend your time.

Luckily, we’ve compiled a respectable list of artists and venues you’re going to want to check out before the weekend.

Lights at The Danforth Music Hall

Toronto’s Lights will be at the Danforth Music Hall this Monday. (Wikimedia Commons)

The biggest name kicking off the week is Toronto’s own Lights. A huge draw for fans of synth-laden pop, concertgoers can expect to hear some tracks from her newest album Midnight Madness at the Danforth Music Hall this Monday at 10 p.m.

Max Frost at The Drake Hotel

Austin, Texas’ Max Frost has come a long way from his blues-inspired stylings. The southern indie pop artist will be playing tunes from his EP Intoxication for fans at the Drake Hotel at 8 p.m.

Frost is joined by Alpha Cub and Rozes.

As is the case every year, organizers will be holding artist showcases at venues throughout Toronto every night of the week. Artists like The Corks, Killer Wails and July will be taking the stage at Bovine Sex Club, The Central and Sneaky Dee’s, respectively.

Baroness at The Opera House

Baroness will take the stage at The Opera House this Tuesday with Mutoid Man. (Wikimedia Commons)

Savannah’s kings of heavy metal will be returning to Toronto to promote their critically-acclaimed fourth album, Purple. Baroness‘ unique blend of rock and sludge is sure to see some headbanging at the Opera House Tuesday at 8.

Members of Converge and Cave In join forces to open as Mutoid Man.

Lapsley at The Mod Club

Liverpool’s Lapsley has brought her brand of alt-R&B across the pond for her fans in Canada. She’ll be sharing the stage with Minneapolis’ Morly at 8:30 Tuesday night at the Mod Club.

Taking a breather from swooning synths and crushing guitars, Sirius/XM Radio remind us that although a far-cry from musical, comics are artists too. The Great Hall will host the hilarious Derek Seguin, Faisal Butt and Matt O’Brien at 9 p.m.

Fans of fretboard acrobatics rejoice – often hailed as the best guitarist in modern metal, Tosin Abasi of progressive metal trio Animals as Leaders will be blowing minds with his chaotic time signatures and lightning-fast fingers at Massey Hall at 8 p.m.

One of the most technically-proficient guitarists in metal today, Tosin Abasi will be performing at Massey Hall Wednesday evening. (Wikimedia Commons)

Vancouver’s alternative rock kings Joy District mash traditional rock instrumentation up with the more adventurous synthesizers that characterize a lot of what you’ll be hearing at CMW this year. They’ll be taking the stage with The Velveteins, The Celebration Army, Lemon Cash at UG3 Live this Wednesday.

Tops are a four-piece from Montreal, who have made their niche delivering “a raw punk take on AM studio pop”. Also joining them at Lee’s Palace at 8 p.m. will be Savoir Adore, Caveboy, Wildlife, Foxtrott, and special guests TMPL.

Vallens at The Velvet Underground

Vallens‘ strand of post-punk misery is the “alter ego” of Toronto guitarist and vocalist Robyn Phillips. Her whirring, reverb-drenched shoegaze will shake the walls at The Velvet Underground this Thursday at 9 p.m.

Bands like Basic Nature, PROGRAMM, ginla, Mothers and many more will be crammed into College Street’s Smiling Buddha for all your independent music needs this Thursday.

Skepta at The Danforth Music Hall

UK grime specialist Skepta will be celebrating the release of his highly anticipated album Konnichiwa the same day as his CMW performance at The Danforth Music Hall at 10 p.m. Friday.

The Black Lips at The Phoenix

A long way from their home in Atlanta, The Black Lips‘ psychedelic garage punk will find its way to Canadian listeners this Friday at the Phoenix with Lint, Red Mass and Death Valley Girls at 8:30 p.m.

Relive the glory days of high school pop-punk and emo with Toronto’s own Homesick at Sneaky Dee’s on College Street at  10 p.m. Presented by Emo Night Brooklyn.

Keep in mind: Sneaky Dee’s is one of the many bars/venues licensed to serve alcohol until 4 a.m. this week. The rest can be found here.