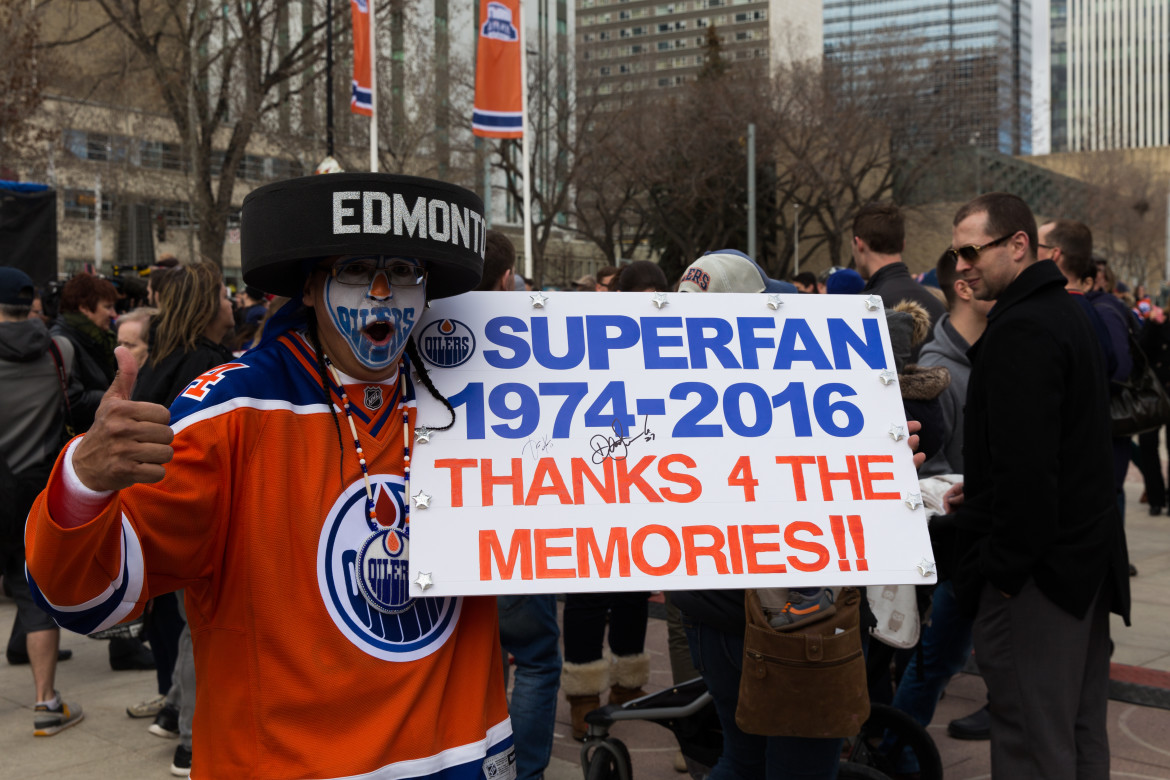 When the Edmonton Oilers won each of their five Stanley Cups, they played in front of sold-out crowds at the Northlands Coliseum. Rexall Place wasn’t even an idea as the Oilers dynasty cruised to four Cup wins between 1983 and 1988.

Even the departure of the greatest to play the game, Wayne Gretzky, couldn’t stop their winning ways as they took home the 1990 Stanley Cup as well.

Wednesday the Oilers played their final game in Rexall place, crushing the hapless Vancouver Canucks 6-2, riding the wave of energy in the building.

The future of Rexall is in doubt as the city decides whether to repurpose the building, or tear it down.

Before the Oilers move into Rogers Place next season, let’s pay homage to the building that housed some of the greatest players, teams, and names in hockey history.

He didn’t get his first point until more than 22 minutes into the game, but by the time the night was over Sam Gagner had gotten into the record books.

On Feb. 2, 2012 Gagner and the hometown Oilers were locked in a three-three tie going into the third.

He already had a goal and two assists but it was far from over. He started the scoring in the final stanza of the game and was in on every Edmonton goal of the evening.

When it was all said and done Gagner had done something historic.

Jared Clinton, writer at The Hockey News, told Humber News the length of time it took between occurrences shows how impressive the feat was.

“It took 23 years after Mario Lemieux last scored eight points in a single game for someone to score eight in a game again.”

This may have ranked higher but it is likely to be done again, maybe not for some time but Clinton seems confident there will be another eight point game.

“It just takes being in the right places at the right time or picking up a secondary assist or two along the way,” he said. “It’s likely to be a long time before we see it again, but eight points is doable.”

Entering the 2006 Stanley Cup Playoffs the Edmonton Oilers were the last-ranked team in the stellar Western Conference.

They were paired up with the President’s Trophy winning Detroit Red Wings in the first-round, and written off by most the hockey world.

After taking a 3-2 series lead on the Red Wings, the Oilers came back to Rexall Place and knocked Detroit out in the one of the biggest upsets of the decade.

The Oilers went on to beat fifth-ranked San Jose and sixth-ranked Anaheim en route to the final.

The 2011-2012 Los Angeles Kings are the only other eight seed to make the final since, although they came away victorious.

Clinton said this is one of the greatest playoff runs of the past decade, and with its ten year anniversary arriving this year, it seems fitting that Rexall should be honoured for its role in the run.

3. The Great One says farewell…

In hindsight this is one of the most influential moments in Edmonton’s franchise history.

If fans had known, watching Gretzky help the home team to their fourth Cup in five years, that he would be leaving town shortly thereafter, the atmosphere in Rexall would have been markedly different and that’s why this isn’t number one on the list.

When the 1988 Stanley Cup Final finished in game five, Gretzky and his fans could not have foreseen the trade that would change hockey forever.

Though he will always be remembered for helping to spread the game into the Southern United States by playing for the Los Angeles Kings, nothing seemed to make sense after trading the man who would become the most prolific scorer in NHL history.

When Gretzky left Edmonton, it seemed there was little chance of cup success in the near future. Mark Messier and company proved naysayers wrong in 1990. CREDIT FLICKR CC (Erik Forsberg)

The Oilers entered the NHL in the 1979-80 season and didn’t miss the playoffs in any of their first 13 seasons.

They made their first final in the 1982-83 series and were matched up against the New York Islanders.

The Oilers lost that year giving the Isles their fourth consecutive Cup win in one of the greatest dynasties in NHL history. Some of the Islanders greatness must have rubbed off because after losing to the Isles that year the Oilers started a dynasty of their own.

After beating the Islanders in the 83-84 final, they won four Cups in the next six years, a record of winning that hasn’t been matched by any team since.

The most recent challenger is the Chicago Blackhawks, who have won three cups in the past six years.

The Oilers dynasty created a class of superstars, Gretzky, Mark Messier, Jari Kurri, and allowed for those superstars to spread the game when their time in Alberta was up.

Gretzky went to Los Angeles and helped stabilize a fledgling Kings franchise, while Messier went to New York and helped the Rangers win a cup for the first time since 1940.

In Gretzky’s second season in the NHL he started to create his legacy.

Mike Bossy and Maurice Richard were the only players to have scored 50 goals in 50 games up to that point, and Gretzky wanted to make his mark.

In a season where he scored 92 goals and 212 points The Great One crushed previous 50 in 50 marks.

On Dec. 30, Gretzky’s Oilers were playing the Philadelphia Flyers at home.

In his 39th game of the season Gretzky scored five goals, including an empty-netter with only three seconds left to reach the 50 goal plateau in only 39 games. By the time he reached 50 games he had amassed 61 goals, something he would do again in the 1983-84 season.

This makes number one on the list because of how safe the record is. Clinton said the game has evolved to the point where getting 50 goals in 50 games is unlikely at best.

“When we were seeing 50-in-50 scorers, the game was wide open and the checking wasn’t as tight.,” he said. “Even if they increase the sizes of the nets, it’s hard to fathom who could score 50 goals in 50 games.”