“Nothing is clear-cut”: A peacekeeper reflects on Afghanistan mission 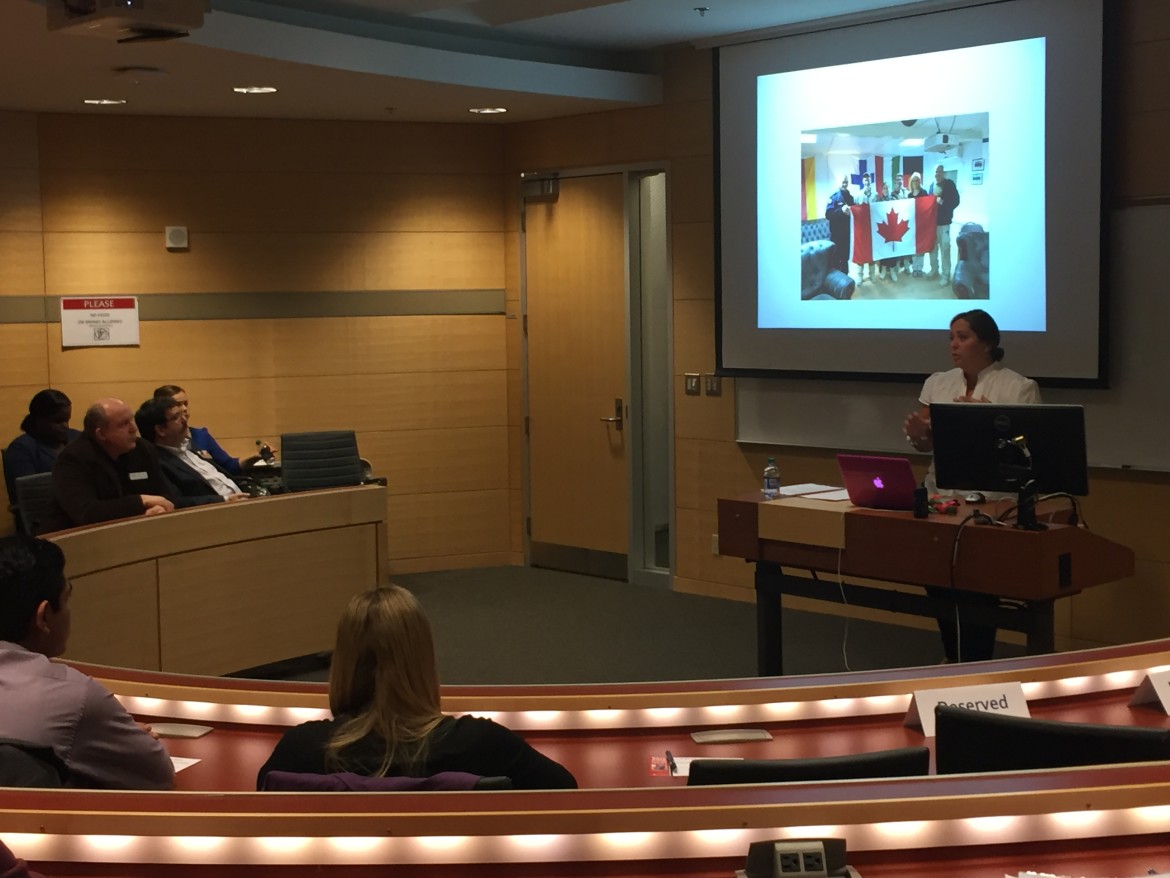 Canada’s military and peacekeeping involvement in Afghanistan may have ended in 2014, but the moral debate around our actions in the war-torn country rage on to this day.

Kim O’Toole, a justice studies professor at the University of Guelph-Humber, spoke to students and staff this afternoon on the moral dilemma she experienced during her deployment to Afghanistan in 2013.

Her presentation, Peacekeeping in Afghanistan: My Moral Dilemma, was the second event of the Winter 2016 Lecture Series hosted by Academic Services at Guelph-Humber.

The aim of the series is to expose faculty and the student body to new ideas and research from university instructors.

O’Toole has taught at Guelph-Humber for nine years and is a Toronto Police staff sergeant with 21 years of experience in human rights and gender-based violence investigations.

She was deployed in 2013 in Mazar-i-Sharif, the fourth-largest city in Afghanistan, to participate in a European Union peacekeeping mission.

Tasked as a human rights adviser and rule of law expert, she worked closely with the Afghan National Police and members of the attorney general’s office.

“We wanted to ensure that women and young girls received full access to the law and full and fair access to human rights,” O’Toole said in the lecture.

This entailed mentoring Afghan women and educating them on their legal rights, but O’Toole faced major challenges, especially while handling cases of sexual assault and adultery.

“The translation from what’s actually in the [law] books to what actually happens… there’s a considerable gap,” she said.

“My moral dilemma comes through this gap,” she continued.

O’Toole highlighted the case of two young girls she encountered during her deployment as an example.

The girls had run away from home before getting abducted and held captive for more than six months by a group of men. During that time, they were chained to a wall and brutally sexually assaulted on a daily basis.

One of the girls disappeared, never to be seen again, within the bowels of the sex trafficking industry.

The other girl, who was 16, escaped and returned home six months pregnant. There, she recounted her harrowing experience to her family.

“Her father was embarrassed and felt that she had shamed her family and he called the police,” said O’Toole.

The police promptly arrested her for adultery and jailed her in an adult facility.

“Eighty per cent of the women incarcerated in the [Mazar-i-Sharif] prison were arrested for adultery-related offenses, like running away,” she said.

She worked for six months to have the girl, whom O’Toole refers to by the pseudonym of “Khadija”, exonerated. Eventually, Khadija was released from jail and allowed to return home with her illegitimate child.

“When she returned home, she was shunned by her father and her family and told she was no longer welcome,” said O’Toole.

She now believes she failed to “consider the cultural and societal effects of Khadija of being accused and charged of adultery.”

O’Toole identified two male suspects in the affair, but the case was never pursued or investigated.

Nonetheless, the mere implication of the suspects added yet another victim to further complicate matters. The family of one suspect offered a younger 14-year-old sister to restore honour to Khadija’s family, “in a sense, to replace Khadija.”

This is prohibited in Afghan law but occurs frequently and is culturally accepted, said O’Toole.

“I’m constantly torn between what is written in law…and what the Afghan culture was at that time and the implications of Sharia law,” she said.

“Nothing is clear-cut, nothing is black and white. Everything is grey,” she said.

Two years later, O’Toole still wonders if she really helped Khadija in getting her exonerated and returned home to her family.

The last she heard, Khadija was living in a shelter with her child and forced to panhandle on the streets to survive.

“I never thought I’d come home and struggle with whether I actually truly helped this girl or not,” said O’Toole.