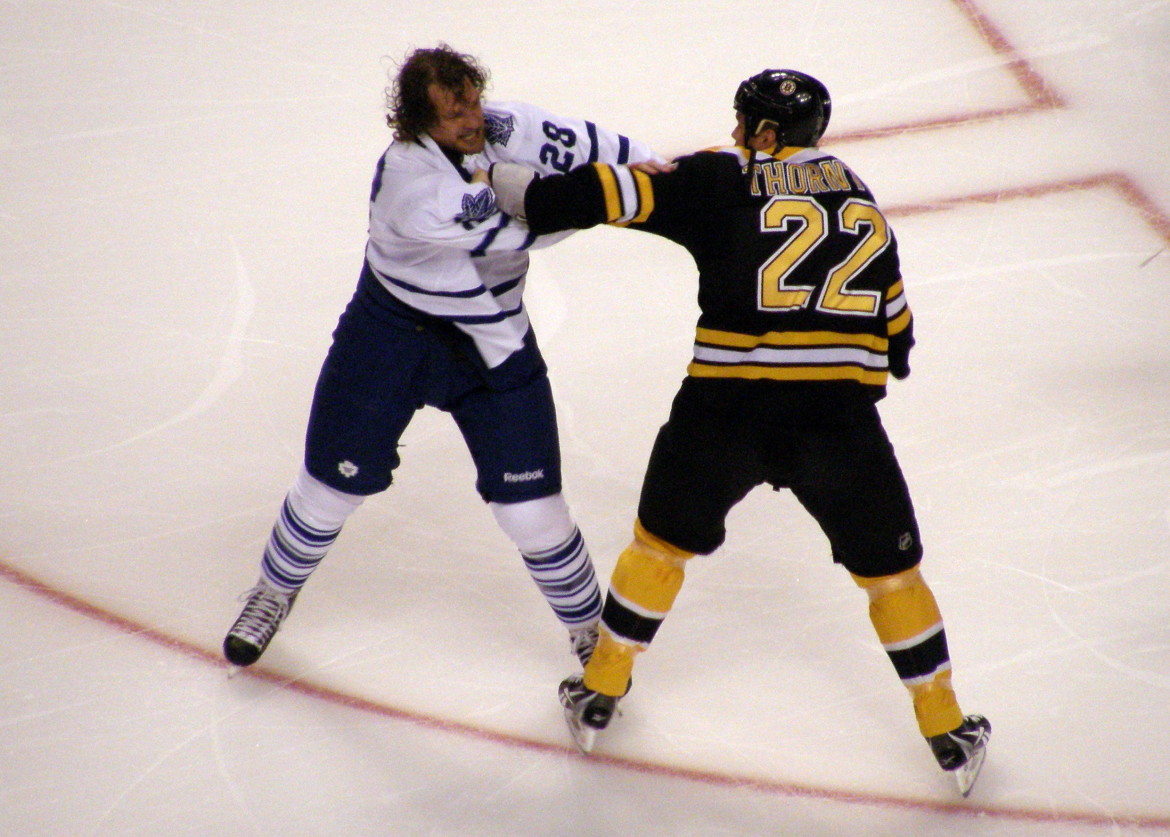 Fighting in NHL is on the decline according to statistics, the question is why? (David Cintron)

Fighting in NHL games is on the decline according to new data and the fact of the matter is, the game is changing and there’s no stopping it now, a hockey observer says.

The drop in the rate of fighting is clearly shown in the year-by-year stats available at hockeyfights.com. During the 2008-09 season, 41 per cent of the games included at least one fight and 173 games included multiple bouts.

This year less than a quarter of games have included fights, and the site estimates only 53 games with more than one fight by the end of the season.

“It absolutely shocked me when last season, fighting just left the game. Last year, without any direction from the league, fighting all but disappeared,” Brophy told Humber News.

In November 2008 Brian Burke, then GM of the Toronto Maple Leafs made a bold statement to the city’s media: “We require, as a team, proper levels of pugnacity, testosterone, truculence and belligerence. That’s how our teams play.”

At the time this was still an accepted school of thought, but seven years later, Burke himself can’t justify employing the pugnacious, truculent types.

What has changed since the Burke and the Leafs employed enforcers like Frazer McLaren and Colton Orr to help the team lead the league in fighting majors (49) and penalty minutes (776).

Just for reference, the Philadelphia Flyers have 794 penalties in minutes in 62 games this season, by contrast McLaren and Orr did their work in a 48 game stretch.

“I just think it’s years and years and years of players in minor hockey, the emphasis being put on skill,” Brophy said. “All those young skilled hockey players are now in the NHL and they don’t feel compelled to fight.”

Matt Larkin, associate editor and columnist at The Hockey News added that the way the game is played in the NHL has changed over the past decade.

“It’s a much faster game than it ever was, and teams require skill on every forward line and defense pair,” he said.

“They can’t afford to waste roster spots on one-dimensional goon players, and that’s why that breed of players faces extinction.”

In addition to the on-ice reasons for taking fighters out of the game, the plethora of evidence showing a connection between head-injuries and chronic traumatic encephalopathy(CTE) has been mounting for the better part of a decade.

“The more we learn about the horror stories of concussions and diseases related to brain trauma, such as CTE, the more it deters people from a culture of fighting,” Larkin said.

As to whether this is a temporary trend Larkin doesn’t think there is any going back.

“We know too much. We won’t be offered the “blue pill” like Neo in The Matrix and decide ignorance is bliss,” Larkin said.

Some fans may worry that the experience of the game will be irrevocably diminished without fighting, Brophy disagrees citing the highest levels of play in the hockey world.

“Most people consider the Olympics and the World Junior Championships to be the prime, the most elite tournaments in the world,” Brophy said.  “Those tournaments don’t have fighting in the equation, and no one seems to care.”