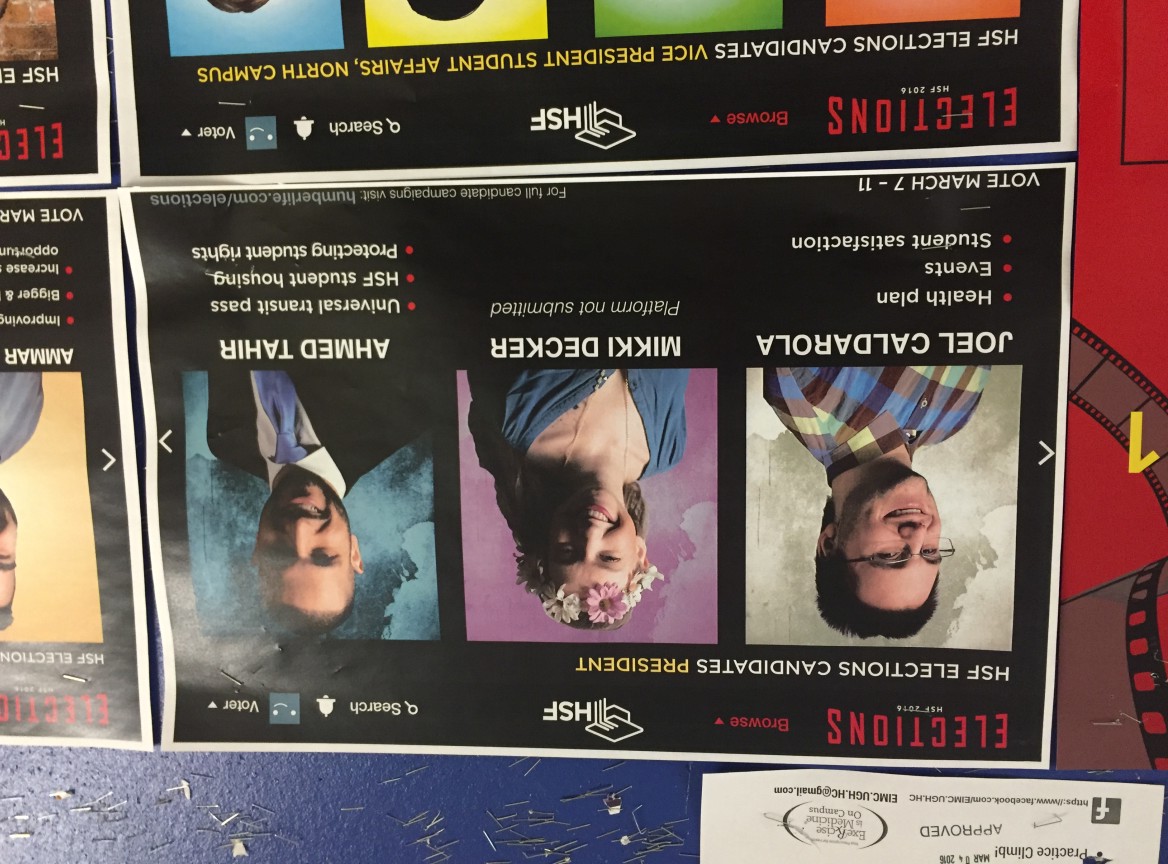 Samantha Singh with files from Samantha Juric and Jessica Reyes

The two remaining Humber Students’ Federation presidential candidates commented publicly Thursday on the sudden dismissal this week of Mikki Decker, the other candidate in the race.

Ahmed Tahir and Joel Caldarola spoke to Humber News two days after Decker was disqualified because of her grade point average not meeting HSF standards.

She was notified of her disqualification after the all candidates forum on March 1. According to the HSF constitution, qualified candidates must have an average of 70 per cent.

“It sucks, because she was working the past week to campaign,”said Tahir, current HSF president.

“But it is what it is in terms of it’s in our constitution to have certain academic standing to be qualified as a candidate,” he said.

This came as a shock because Decker, who up to this week was vice president of student affairs, said she was under the impression that the standard was a 65 per cent average.

As well, Decker raised issues about her mental health with Humber News.

“Not only have I been completely transparent as a student and as a human and as the VP around my mental health…The fact that I have obtained a 65 per cent is miraculous,” Decker said.

Not only was she disqualified as a candidate, under the same rules and regulations she is no longer allowed to be the vice president of student affairs at North campus.

Ercole Perrone, executive director of HSF told Humber News on Wednesday, “we only found out about her fall semester grades, Sunday night, so that’s why the timing of the decision kind of looks a little off because that’s when the information became available.”

In response to the news Decker added, “It’s absolutely impossible as a student to get past a 70 per cent with mental health sometimes, and HSF doesn’t understand mental health. Period.”

“I think on a regular basis, members of her team and members of the organization have done whatever they could to continue to support her. We’ve accommodated her in many ways in terms of how she can go about executing her duties.”

Ammar Abdul-Raheem, VP of student life, and Ahmed Tahir, president, both running to be re-election during the 2016 HSF elections in the Humber News studio.

Humber News reporters asked for comments about Decker’s dismissal from both incumbents of HSF.

“I think for me it was a really big disappointment that it happened…I wasn’t a part of that decision at all because me as a candidate oversees me as a president during this two week period and any decision related at all until elections,” said Tahir.

“There’s always been this sentiment that we should get rid of the 70 per cent minimum because you don’t need that much to be a good leader,” said Abdul-Raheem who has been a part of HSF for a year.

He said he hopes the 70 per cent minimum goes away but he understands why it was put in place to begin with.

Caldarola said he really liked and supported Decker, and her platform.

“In all honesty out of the three candidates running for this, I thought she was the one who deserved it the most and the one who had the best ideas and the best action plan to make it happen,” said Caldarola.

Tahir has said that a push to change the student federation constitution is already underway.

“I was a part of the GRC, which is the Governance Review Committee, [that] looks at the constitution to change it, and it was actually my idea to change it to make it not a 70 per cent average but not to be on academic probation,” said Tahir.

Students will have the opportunity to help change HSF rules and regulations after the elections at the Annual General Meeting at the end of March.