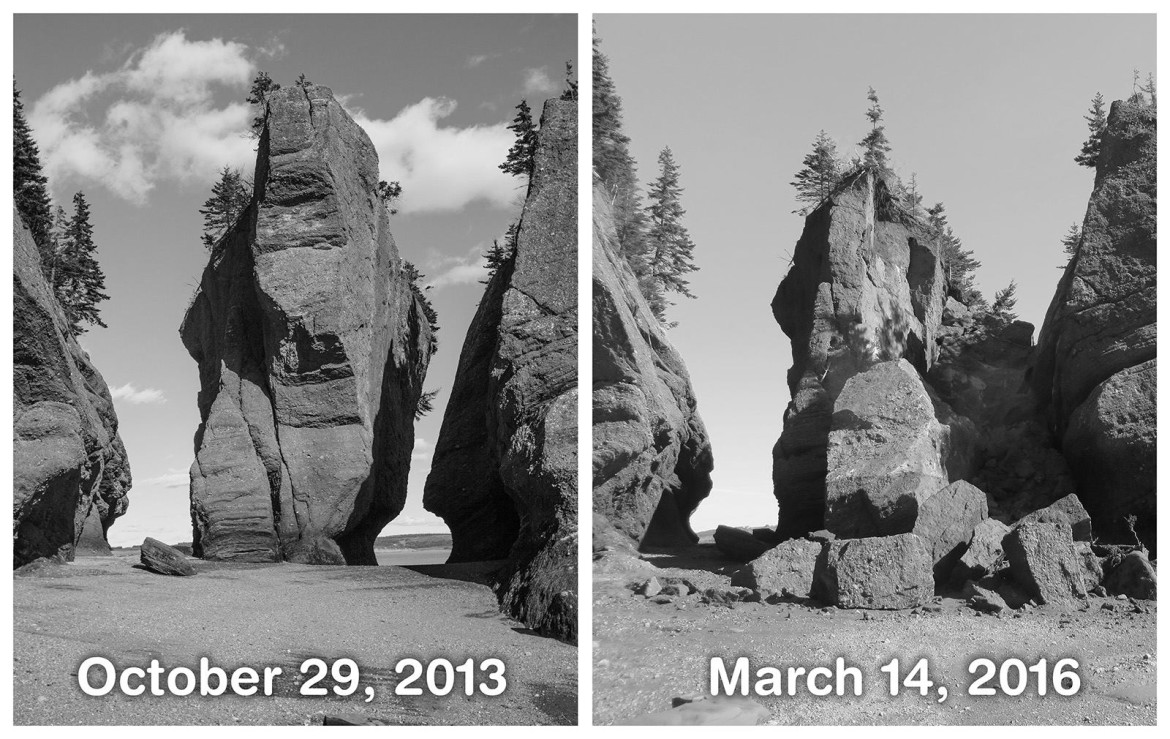 A popular Canadian East coast landmark will never look the same after part of it collapsed Monday, but travel experts say this should not effect the tourism in New Brunswick.

Some 200 tones of Elephant Rock collapsed, according to officials.

It’s part of Hopewell Rocks, also called Flower Rock, which are a main landmark in New Brunswick, with tourists coming from all over the world to see rock formations of all sizes along the world’s highest tides.

Interactive Timeline: A history of the Bay of Fundy and Hopewell Rocks

The official Facebook page for Hopewell Rocks says that the collapse was caused by a combination of tide and weather.

Natalie Forrest, CEO of Marlin travel in Miramichi, N.B., told Humber News this will cause more people to want to visit.

“The fact that we got to witness this evolution of the rocks splitting is spectacular,” said Forrest.

Forrest said whenever she visits the rocks she is always amazed at the level of the tides throughout the day.

Although the tide may start off very high, later on in the day visitors are walking on the ocean floor, she said/

“I personally think that the attention the rocks are getting now will drive more people to this area – people who never knew about them before may find out now and perhaps plan a trip here,” she said.

“Mother Nature is unpredictable, but is always in charge. Hopefully New Brunswick Tourism will benefit because of it.”

Kevin Snair, the park’s supervisor of interpretive services at Hopewell Rocks, told news outlets that when the snow melts the water flows into the cracks in the rocks. This eventually freezes when temperatures drop at night which ultimately weakens the stone.

The rock once had two pathways where visitors could walk around on each side of it.

However, after the collapse, one side is now blocked as shown in the photo below posted by The Hopewell Rocks official Facebook page.

No one was hurt, but new safety warnings were announced on Tuesday.

Snair told CBC news that visitors should steer clear of the cliffs and instead enjoy the view from a distance.

There will be an inspection of the cliff faces to look for loose rocks and any potential safety hazards which would be done ahead of the park opening in May.

Forrest isn’t the only one who thinks this won’t affect New Brunswick’s tourism.

Ellen Tucker, the President of Freedom Tours and Travel in Saint John, N.B., told Humber News that it’s expected that the rocks will constantly change.

“That is what makes our coastline so beautiful and dramatic. This dramatic change only reinforces the power of the Bay of Fundy and should actually help our tourism,” Tucker said.

She said that the rocks are a very popular attraction in the province.

“The Interpretative Centre at the rocks offers an illuminating understanding of the power of the Bay of Fundy and its vital role in the lives of our people and culture of our coastline communities.”

Terri Clark, another travel agent at Marin Travel in New Brunswick said said that because there are 16 other rocks, she does not see this becoming a problem for the province’s tourism.

“I can’t see any tourists thinking their New Brunswick vacation is a bust just because the Elephant rock no longer exists [the way it used to].”

The Hopewell Rocks Facebook page kept things positive by being optimistic about the future.

“The collapse alters a certain dynamic, but who knows what may emerge, from what at first glance looks like nothing more than rubble…stay tuned,” the page posted.

Visitors can visit the park starting May 20 until Oct. 10.