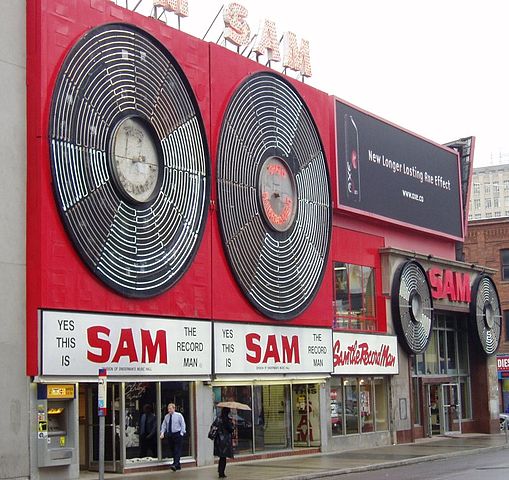 Toronto’s iconic Sam the Record Man signs will see the light again after being hidden for almost a decade.

Although the record store isn’t coming back to life, the famous black spinning records on a red background is coming back to its old home on Yonge Street.

Sam Sniderman was a big part of the Canadian music scene and promoter of local music. He was also one of the founders of the famous record store Sam the Record Man.

When Sniderman retired in 2000 he  gave ownership of the business to his two sons, Bobby and Jason.

Ryerson University purchased the property from the Sniderman family after the record store went bankrupt in October 2001.

Ryerson converted the three storey building into a student learning centre. The school placed the two neon signs in storage and promised to redisplay them in the future.

The university is now receiving bids from companies to reinstall the signs on the side of the learning centre.

In a timeline posted by the Globe and Mail, Toronto’s city council voted to have the sign placed on the roof of the Toronto Public Health building on Yonge and Dundas Square in 2014.

Sam Sniderman’s son said the signs will again be a great addition to downtown.

“The signs are going to be identifiable”, said Bobby Sniderman. “I think anything that can connect people to the city is relevant,”

“I think it’ll be important for the people who live here and those who visit,” he added.