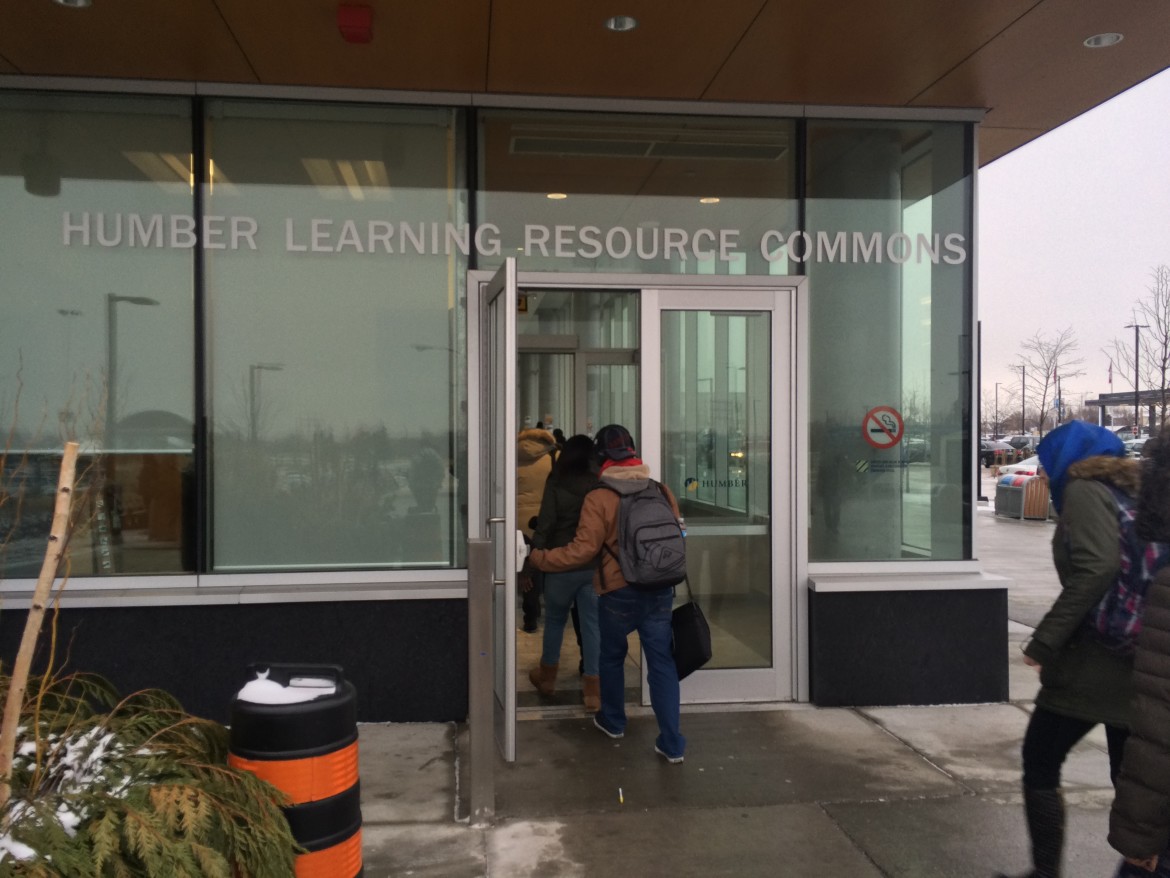 Students entering into the Learning Resource Commons from the side entrance by the bus loop where the automatic door does not work when pushing the button from the outside. (Ryan Durgy)

Humber News has found that a broken accessible side entrance door and outside push button leading into Humber’s Learning Resource Commons (LRC) at the North Campus will soon be fixed, although no date has been given.

The LRC side entrance door is not the only accessible door that has experienced problems.

“We think it wasn’t installed properly. There are four others in the building that have done the same thing,” Spencer Wood, Associate Director of Maintenance and Operations, told Humber news in an email on Tuesday.

The new building was opened less than a year ago last April.

Rob Kilfoyle, Director of Public Safety, said the push button damage is being attributed to a heavy object or some type of push cart.

“This damage has caused the exterior door to not work properly.  The interior door does work, but its button is also having some issues,” Kilfoyle said in an email statement.

Still, some students – including those who need accessible entrances the most – said they weren’t upset about the side door being broken.

Samantha Borrelli,  a student in the Community Integration through Co-operative Education program, uses a motorized wheelchair and said she finds campus accessible.

Borrelli says she doesn’t use the side doors of the new building.

“I use the very front doors,” Borrelli said.

“They’re easier to get in. They’re the easiest,” she said.

Peter Bussmann, an accounting student, uses a motorized wheelchair and also enters through the front of the LRC and finds the campus accessible.

“It’s all one building, it’s not two buildings. It’s all connected,” Bussmann said.

He said he hates when there is a service disruption with the automatic doors but said it doesn’t happen often.

Other students weighed in, as well.

Srishti Arora and Kristen Blair-Pulido, both fashion arts students, said they enter through the side entrance everyday.

Blair-Pulido was used to using the outside button, also known as a Handicap Activation Push Button, to access the new building because she would use it everyday.

“I’m germaphobic, I guess, so I like pressing the button,” Blair-Pulido said.

Kilfoyle said the school is required under the Accessibility for Ontarians with Disabilities Act to post a notice informing users of the automated doors that the alternative is at the front.

This sign tells students to use the main entrance of the Learning Resource Commons for accessible door access. (Ryan Durgy)

Wood said the button wasn’t the only reason the door wasn’t working.

“It has to do with the hinges that have sagged, it just happens to be the door with the handicapped door operator on it.”

“For the first two or three weeks (of January) it was working, the door was opening and now it’s not. It’s clearly broken,” Arora said.

Kilfoyle said a Facilities Service request was submitted and they’re waiting on a technician to assess make the repairs.

“No timeline available at this time,” Kilfoyle said.