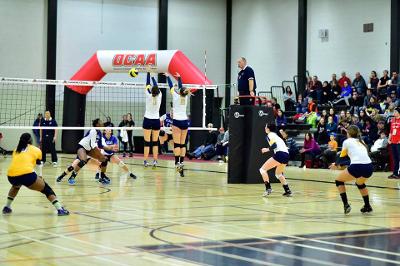 After winning their ninth consecutive OCAA (Ontario Colleges Athletics Association) championship under the leadership of head coach Chris Wilkins, Humber’s women’s volleyball team is back home getting ready for nationals next week.

The Humber Hawks were in North Bay this weekend where they took on the Niagara Knights and won in three straight sets. The team is going into the CCAA (Canadian Collegiate Athletic Association) national championship on a 109 winning streak.

However, their celebration was cut short. Wilkins said the students hit the books yesterday to catch up on school work and they start practice again tonight. Players are expected to maintain a minimum 60 per cent GPA.

“We have a strong returning team, we’re probably stronger than we were last year,” said Wilkins. “I think we have a real good shot at a first-ever medal in the national championship for an Ontario Team.”

Nationals will be held at Holland College in P.E.I. on March 9. Humber is among the eight teams that are set to compete.

The Hawks don’t know who their first-round opponent will be as the rankings have yet to be released. Dean Wylie, assistant coach, said they’re doing their research on the competition in order to prepare for games to come.

Wylie said they study how the other teams play and train in accordance to their tactics.

Training is very time consuming, Wilkins said. On average, the team trains three to four times a week with competitions almost every weekend. That preparation was central to the team’s performance last year, where they came in fourth place at nationals.

“It’s non-stop. Everyday they’re having to manage their time between sports and academics,” said Wilkins.

“You make the time because it’s something that you love.” – Deborah Mitchell

Graduating senior Deborah Mitchell said getting to where she is as an athlete and a student takes a lot of dedication.

“If you’re working and you have classes and you have practice you don’t really have time for yourself to do anything but you make the time because it’s something that you love,” said Mitchell.

But even though she’s doing something she loves, Mitchell said being an athlete takes a toll on her body.

“With the constant jumping and moving around – your body does hurt. You have to be proactive and go into therapy as regular as possible,” said Mitchell. “Normally after practice I’ll go in the ice tub to ice down my body to prevent me from being in pain the next day.”

Mitchell and teammate Thalia Hanniman provided the team with some city recognition with an appearance on Breakfast Television on Feb.29.

“It was a great experience to kind of put Humber on the map,” said Mitchell. “Any other young athletes out there who are watching, they know it is possible to succeed in something you really enjoy.”

Between the two players they have never lost a game, resulting in a 105-0 record and earning five OCAA gold medals.

This is the final season Mitchell and Hanniman will compete as Humber Hawks.