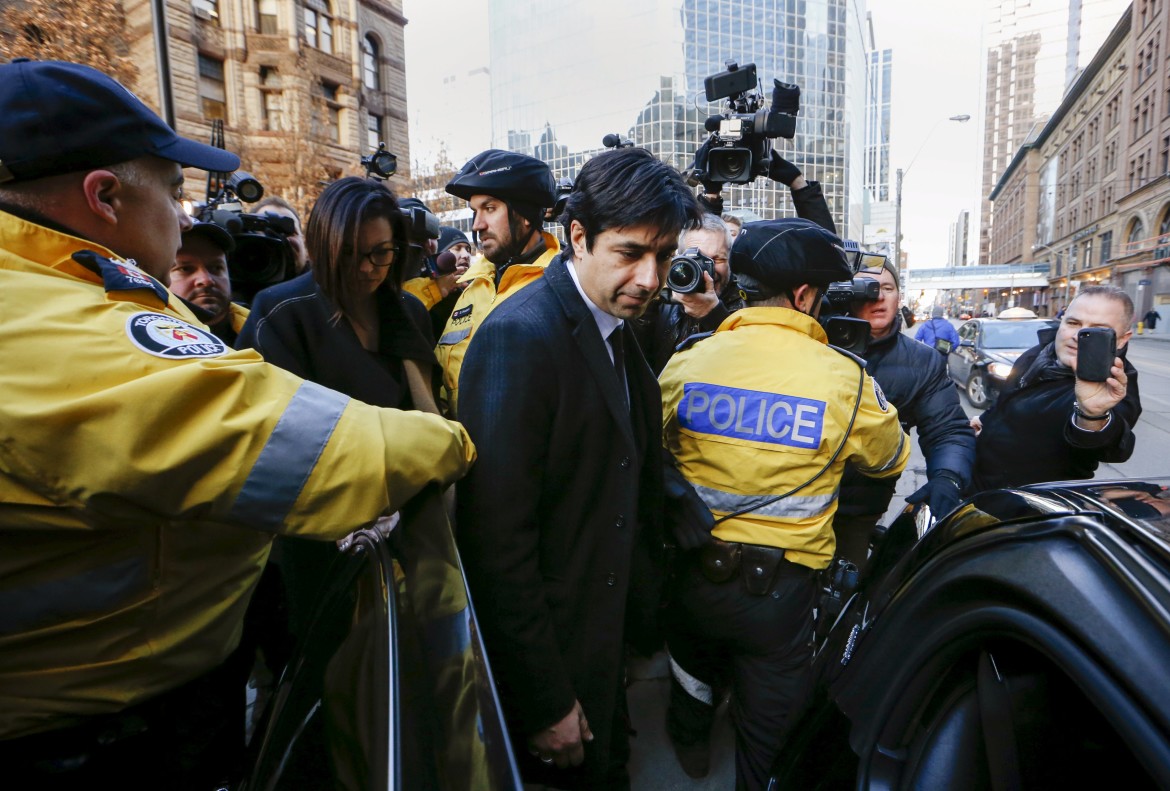 DeCoutere, known for her role on the Trailer Park Boys, testified early on Friday that she had no romantic interest in Ghomeshi. She maintained that she only sought friendship.

Marie Henein, Ghomeshi’s lead lawyer, presented the court with documents she said demonstrate that DeCoutere was withholding key details of her relationship with the ex-CBC host.

One document was an e-mail from July 5, 2003, mere hours after the alleged assault, which Henein had DeCoutere read out loud in court.

“You kicked my a– last night and that makes me want to f— your brains out tonight,” the e-mail read.

DeCoutere countered that her and Ghomeshi never had sex and that she doesn’t remember writing the e-mail, but doesn’t deny authorship.

In an e-mail dated June 11, 2004, almost a year after the night in question, DeCoutere threatens to “beat the crap” out of Ghomeshi if they don’t meet in Banff.

Another document the defence revealed was a hand-written letter DeCoutere wrote to Ghomeshi on July 9, 2003, four days after the alleged assault.

Actor Lucy DeCoutere during a video interview with the Star in regards to her past personal experiences and interactions with CBC host Jian Ghomeshi. (Chris So/Toronto Star via Getty Images)

In the letter, DeCoutere said she came to Toronto solely to see Ghomeshi.

“You totally knocked me out,” it reads. “What could be better than lying with you listening to music?”

DeCoutere had testified Thursday morning that Ghomeshi’s stated desire to listen to music while cuddling was “creepy” and “awkward”.

The letter continued describing feelings towards Ghomeshi that appear to be romantic.

“I’m worried that I gave you mixed messages. If I did, I apologize …  Jian, you’re great. I want to have more fun easy times with you,” the letter said. “I’m sad we didn’t spend the night together.”

Henein then asked DeCoutere to read the final line aloud. “I love your hands,” signed Lucy.

During a brief redirect, the Crown asked DeCoutere to describe the context and explain why she wrote the letter.

“This is and remains the trial about Mr. Ghomeshi’s conduct…what Lucy did and how she felt of the aftermath of the assault does not change that essential fact.” – Gillian Hnatiw, Lucy DeCoutere’s lawyer

“It was very candid. There was no untruth in this letter,” DeCoutere told the Crown. “The last line is me pointing love to the very thing he used to hurt me.”

DeCoutere maintained that she forgot she had written the letter, conceding that she didn’t tell the Crown, police or judge about its existence.

Henein asked DeCoutere why she repeatedly attempted to contact Ghomeshi if she had no interest in him romantically.

“A lot of people who have been assaulted will stay in touch after, especially if they work in a small industry,” DeCoutere said.

The day in court ended when Crown attorney Michael Callahan said they have a new disclosure from their next witness and requested adjournment until Monday at 10 a.m., which was granted.

“This is and remains the trial about Mr. Ghomeshi’s conduct,” Hnatiw said. “What Lucy did and how she felt of the aftermath of the assault does not change that essential fact.

“She maintains her allegations and remains resolute in her decision to come forward and please be reminded when the allegations against Mr. Ghomeshi first began to surface he himself admitted that he does enjoy engaging in violence for sexual pleasure,” she added.

Ghomeshi faces four counts of sexual assault and one count of overcoming resistance through choking. There are three separate complainants, including DeCoutere.