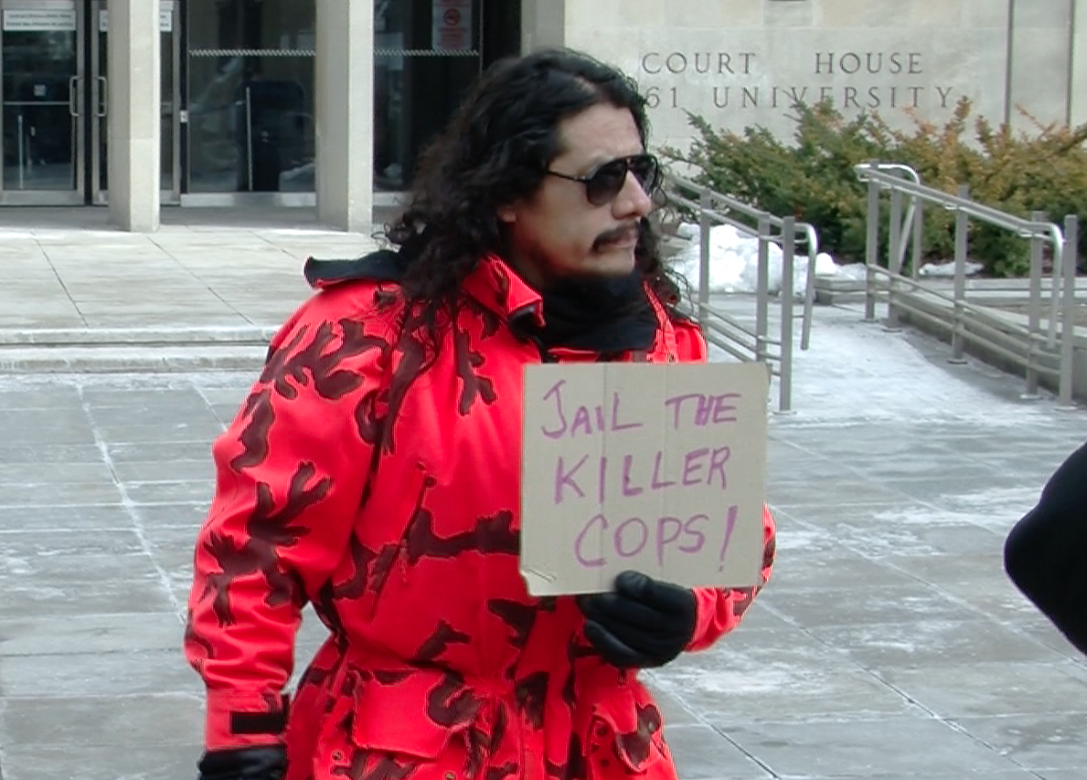 Miguel Avila, a representative for Cop Watch Toronto, held up a sign in protest outside the Forcillo trial after the verdict was released.

Some people in Toronto remain upset about the decision that left Const. James Forcillo suspended with pay after being found guilty of attempted murder in the death of 18-year-old Sammy Yatim.

Forcillo was found not guilty of manslaughter, second-degree murder and aggravated assault on Monday. The verdict was reached after six days of deliberations.

It was a relatively peaceful scene outside of the 361 University Court House in downtown Toronto, following the verdict, save for a few protesters.

One protester, Miguel Avila, a representative for Cop Watch Toronto, held up a cardboard sign with the statement “Jail the killer cops!” written in purple ink.

“As a regular observer and monitor of Toronto police acts of brutality against Toronto citizens, I think there is a huge mountain to climb in terms of discipline,” Avila said.

Avila says that he wants to see the Police Act of Ontario reevaluated to make it easier for police boards to fire officers charged with and found guilty of criminal negligence.

Chief of Police Mark Saunders should fire Forcillo and the constable should not be paid while the case is before the courts, he said.

This opinion is not uncommon among many social media users who continue to follow the case and express their disappointment in the verdict.

A few hours after the verdict had been reached, Saunders said in a news conference that Forcillo will continue to be suspended with pay.

This protestor was heard yelling outside of the Court House where Constable Forcillo verdict was delivered.

Saunders says he considers the crisis training officers receive to be adequate but there is room for improvement.

“We’ve added another full day dedicated to training of people in crisis,” he said. “We are teaching the officers the importance of de-escalation.”

Forcillo is currently out on bail and will be back in court on May 16. In this case, the minimum penalty for attempted murder is five years imprisonment and the maximum is a life sentence.

Saunders did not comment on the case since Forcillo’s sentencing has yet to take place.

At City Hall on Monday, Toronto Mayor John Tory described the death of Yatim as a “tragic loss for his family and this community.”

He also stated that he supports Saunders implementing the necessary training of law enforcement in order to reach a goal of no injuries or causalities.

When Yatim’s mother exited the courthouse she expressed her grief in the loss of her son.

“I would now like to be part of the discussion to change the police training policies when dealing with people in crisis, so this painful incident does not repeat again. Sammy was a young man who had his whole future ahead of him … we lost him forever. Nothing in this world will compensate me for the loss of my son.”