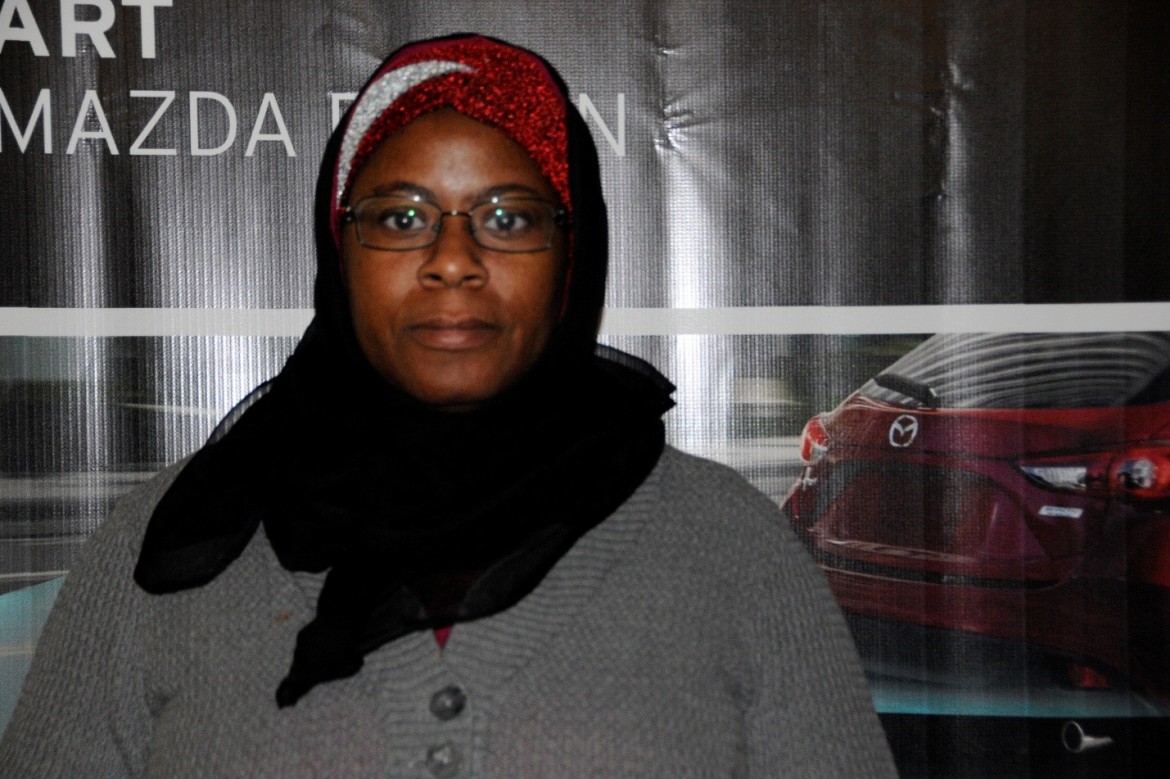 Numa Bumpe proudly stands by the rights that all of humanity deserve. (Lia Richardson/Humber News)

It’s the holiday season, but some feel they won’t be sharing in the spirit of goodwill to all.

Many Muslim students are feeling anxious about travelling home from school during the break because of world events beyond their control.

“I’ve felt racism before but not like this,” said Hassan Ahmed, 19, a Toronto native who is an English Studies student at the University of Nipissing.

“Somali people are getting beat up because of their religion,” he said.

“It’s messed up and I’m kind of scared about it,” Ahmed said. “It’s actually so crazy.”

“Aside from the money, I mainly became a security guard because I want to serve and protect. I want to show that all people I care no matter their skin colour or whatever,” Sevim said.

Taha Ali, Vice-President of the Muslim Student Association (MSA) at the University of Guelph-Humber, said the singling out of Muslims goes deeper than faith.

“The issue is not one of religion, but rather, it is one of humanity,” Ali said.

“Every time we allow prejudice and discriminatory behaviour to occur, we drift further from the humanity that exists within a healthy community,” Ali said.

“Showing support and a united front between all faiths, colours, and backgrounds develops a sense of security, acceptance and unity within our society,” he said.

Ali said he thinks the problem lies within ignorance and education is the only cure to end discrimination and racism for all.

He said hosting events, lectures and seminars to teach people about the faith would get rid of the “fear of the unknown.”

Ali has personal stories of discrimination. “I wore a suit to school one day for a presentation and was well received by most with the polite head nods, doors being held open and all,” he said.

“The next day, I wore a traditional gown for an MSA event and saw a huge difference in the way I was treated with the dirty looks and hearing comments being made,” said Ali.

“The other thing is solidarity within the community. It makes a world of difference when people outside of the Islamic faith stand up and show solidarity with fellow citizens who are facing discrimination,” he said.

Ali said he expected much more from his city as it’s mostly made up of diverse, first-generation Canadians.

He said his association has been working to find better solutions with the Public Safety department and Student Success and Engagement at Humber. These meetings include counselling for Muslim students and safety advice.

“There have been several Muslim students at Humber as well who have been victims of these attacks within the GTA, especially while riding public transportation. As a community, the impact has been bittersweet,” Ali said.

Humber President Chris Whitaker said in November the Paris attack has led to some harassment as well as racist remarks against Muslim students on campus. He said this violates Humber’s code of student conduct and will not be tolerated.