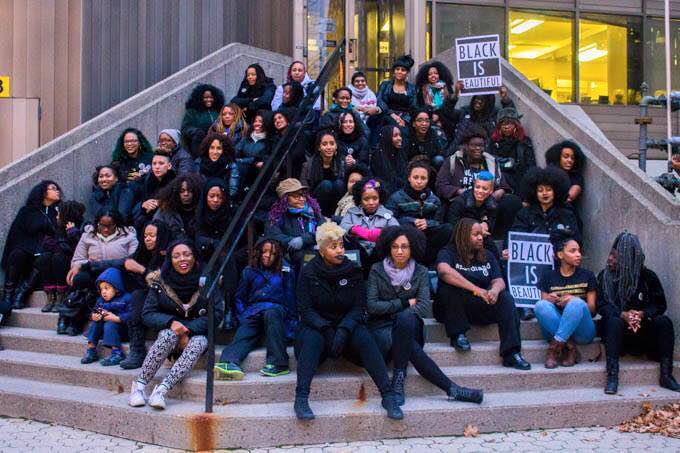 Toronto activist, Melissa Theodore, came to the TDSB building at Yonge Street to show her support. “The black community showed up and showed out for this little girl last night,” Theodore said. (Photo/Aresell Joseph)

Protesters gathered outside of the Toronto District School Board’s head office on Friday, denouncing a move by a school principal to send a black 13-year-old girl home for having “poofy” hair.

The incident at Amesbury Middle School in November gained widespread media attention after the girl’s aunt, Kaysie Quansah, posted on Facebook on Nov. 6. The principal herself was a black woman

“No Black child should feel this type of humiliation at school,” the posting said.

The protesters – an estimated 80 women and a few men, as well – said their demands aren’t only for Amesbury Middle School.

The rally was intended to get the Toronto’s school board attention, Pascale Diverlus, an organizer with Black Lives Matter Toronto, told Humber News.

And, she said, the group plans to keep chanting and protesting.

“This is more than just one isolated event,” Diverlus said. “It’s not just in one classroom that this is happening, it’s all around the school board.”

Dozens of women chanted that “their black hair is beautiful.”

Black people need to let each other know that their lives matter, that they are beautiful, Diverlus told Humber News.

The Black Lives Matter  demands for the TDSB include the creation of a board wide policy ensuring uniform codes and practices, and the removal of Amesbury Middle School’s principal pending a public apology.

“For privacy reasons, we can’t speak to the details about the specific interaction between a student at Amesbury MS and the principal regarding the student’s hair,” TDSB spokesperson Shari Schwartz-Maltz told The Toronto Star.

Ebi Agbeyegbe, a University of Toronto Mississauga student union president, was one of the few black men at Friday’s rally.

The principal at Amesbury Middle School “should be unashamed of herself and should let kids be themselves in whatever capacity,” Agbeyegbe said.