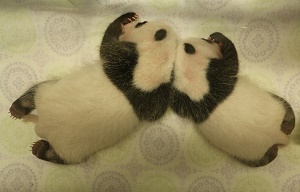 The Toronto Zoo is celebrating a baby boom.

Twin giant pandas, the first ever born in a Canadian zoo, turns one month today while four rare white lion cubs are a little over a month.

The twin pandas and white lion cubs remain in the maternity den with their mothers out of public view.

Videos and pictures released by Toronto Zoo certainly show all six cubs went from cute to cuter in a space of a month.

Zoo staff Tweeted that the two pandas are “progressing very well,” however they are still in a critical stage in life.

“The larger of the twin giant panda cubs weighs over one kilogram, with the smaller cub is not far behind at approximately 750 grams,” the Toronto Zoo said in a press release. “They truly look like giant panda’s now.”

The Zoo said the cubs’ undercoat is growing thicker, making  their bodies look much whiter.

The first thirty days are critical for all of them, the Toronto Zoo said.

Both giant pandas and while lions are endangered species.

White lions may be king of the jungle, however humans present the greatest danger to the species.

The Toronto Zoo said with limited  hunting grounds, white lions sometimes resort to hunting livestock and are frequently poisoned or shot by farmers.

Giant pandas are listed as endangered in the World Conservation Union’s Red List of Threatened Species.

There are approximately 1,600 left in the wild. More than 300 pandas live in zoos and breeding centers around the world, mostly in China.

Er Shun cleans one of her cubs.

Er Shun continues to be a great mother and the cubs are progressing very well #TOpandacubs pic.twitter.com/GUIobCoIq6

Take a listen to one of the giant pandas using their vocal cords.

White Lion cubs pose for a photograph with their mother.

At 1 month, Makali’s cubs are all active, mobile and playful and approx. the size of an 8wk old Labrador #Caturday pic.twitter.com/oTeeee7VsL — The Toronto Zoo (@TheTorontoZoo) October 31, 2015

Three of the four white lion cubs sit and watch as their sibling plays.