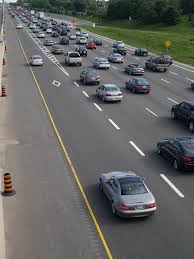 Could toll lanes get big wheels turning around the GTA?

Based on the proposal, single-occupant vehicles could access HOV lanes in exchange for paying a toll.

The new report released Monday morning by the Ecofiscal Commission targets the cost of gridlock, saying “time lost in traffic costs the GTHA $7 billion per year.”

According to the study, that number could rise to $15 billion annually over the next 15 years.

The Ecofiscal Commission consists of experts from universities and think tanks across Canada who have created individualized solutions for four major Canadian cities: Toronto, Montreal, Calgary and Vancouver.

The report urges all levels of government to shift transportation incentives and integrate well-designed pilot projects that will justify HOV tolling before adopting widespread tolls nationwide.

Creating HOT lanes is not necessarily the best solution, but it is the easiest option to implement, said Trent University professor emeritus Harry Kitchen.

“While HOT tolling will be an easier and cheaper remedy to congestion than full-blown tolling on highways, it will be a hard sell for pre-existing HOV users who will not want to pay for the space,” Kitchen said.

Some argue that HOT lanes will provide only a band-aid solution to traffic woes.

“This avoids the basic question on how the city should handle a very diverse set of travel requirements. We’ve created a region where travel patterns are all based on the idea that people drive and we’ve run out of capacity for them to do that,” Munro said.

The HOT lanes could be a solution for highways that cannot widen any more in order to have more capacity.

In a written statement provided to Humber News the MTO said that the Ministry is in the process of developing the HOT lane proposal.

“When evaluating options for HOT lanes, we will assess how well they will help to manage traffic congestion. This includes assessing the feasibility of building new and converting select provincial high occupancy vehicle (HOV) lanes in the Greater Toronto Hamilton Area (GTHA) into HOT lanes,” according to an MTO written statement.

The MTO says that by allowing carpools to use the HOT lanes for free, HOT lanes will continue to encourage travelers to change the way they travel.

The exact locations of the future HOT lanes are still under study.