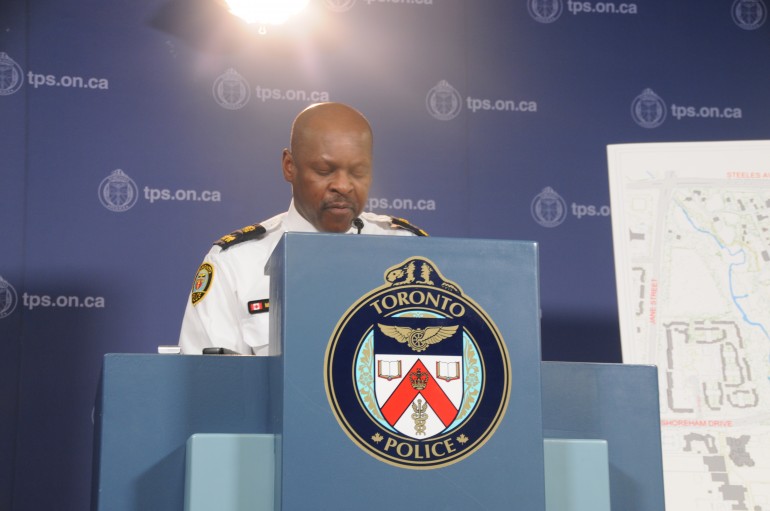 Toronto police chief Mark Saunders is asking the city to increase the police spending budget to $1 billion Thursday which is causing some to speak out.

Saunders is requesting a $27 million increase to the budget which is already the second highest in the city after funding for transit.

Not everyone is onside with supporting the increase.

“I went back and looked at last year’s budget. Last year’s budget was not $979 million, it was $957 million. They just aren’t telling the truth about the figures,” said Sewell, who was mayor of Toronto from 1978-1980.

The city should be investing more money into preventing crime than policing it, said Sewell.

“I would put lots more money into recreation programs for kids. If we want to start trying to prevent crime that’s the best way of doing that,” he said. “But in fact by asking for $50 million more than the budget last year they’re basically threatening a lot of other programs in this city.”

Saunders spoke to reporters last week and said he’s trying to keep the budget under control, CBC reported, and that he’s doing what he can with what he is given.

“We won’t be pulling any rabbits out of any hats. The numbers are whatever the numbers are that they give me and I’ll do the best with whatever I’ve got,” he said.

Close to 90 per cent of the budget is allocated to pay for salaries that are determined by collective agreements according to Rick DeFacendis, program co-ordinator for Humber College’s police foundations program.

This limits the Police Services Board’s ability to shrink the police budget in a dramatic way, he said.

“The reality is that there are certain contractual requirements that limit the ability of the Police Services Board and the executive of the Toronto Police Service to cut costs within their overall budget,” he said.

“They’re extraordinarily well paid.  You start out as a police officer, a fifth class officer at $65,000 a  year,” said Sewell. By the time officers reach their fifth year, they’re making $98,000 a year, he said.

A Nov. 1 poll by the African Canadian Legal Clinic found 53 per cent of Ontarians would rather see increased spending on social services than police, the Toronto Star reported.

The poll asked respondents where they would rather have their future tax dollars go, police or social services.

The poll surveyed citizens through both land lines and cellphones and is considered accurate within 4.83 percentage points, 19 times out of 20.

“They do not deserve more money, they should be living within the budget constraints that the city has set,” said Sewell.