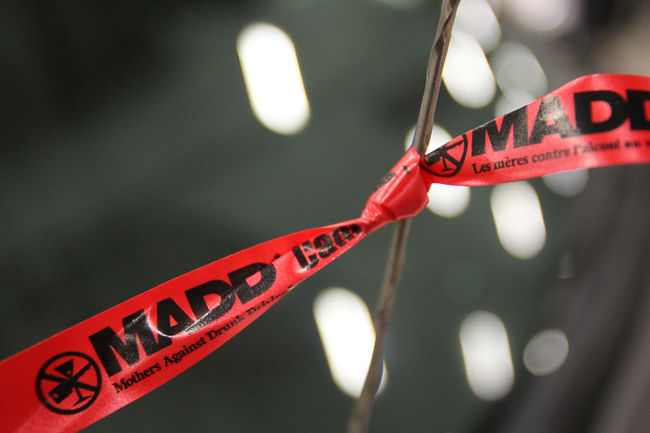 MADD Canada chapters are sending out their yearly reminder to drive sober this holiday season with the launch of their Project Red Ribbon campaign.

Saunders said the holiday season is a time when there’s more opportunity to make wrong decisions.

“We want to make sure that everyone this holiday season has a safe holiday season,” he said as he presented a memory wall of those lost to impaired driving accidents.

The campaign is to encourage drivers to make the right decisions so the city can continue to stay safe, he said.

“MADD along with Toronto police ought to be commended for all that they do for keeping our roads safe,” said Del Duca.

In the last 14 years, Ontario has consistently ranked top three in road safety across North America and has one of the lowest impaired driving rates across Canada, according to Del Duca.

“Ontario will remain on the forefront of road safety,” said Del Duca. “There is no place for impaired drivers on Ontario’s roads.”

Del Duca said that any form of impaired driving is “completely unacceptable.”

“Encouraging a safe ride home and actively preventing unsafe drivers from using our roadways could be the difference from a safe and festive or a sad and tragic holiday season.”

“We’re wanting to heighten the awareness and get the message out there about impaired driving,” she said, referring to “the thousands of people who have been injured or killed by an impaired driver.”

According to MADD’s website, an average of four Canadians are killed and 174 are injured as a result of impaired-related crashes every day. Although impaired driving can occur at any time of the day, the most common time is between 12 a.m. to 4 a.m.

“We have to remind people to continue to change their attitude about impaired driving,” she said.

The campaign targets the Christmas and New Year holiday season because of the increased risk of impaired driving.

MADD offers the following tips on how to avoid driving under the influence:

Throughout the campaign, MADD Toronto will be participating in a number of fundraising and awareness events. Between Nov. 23-27, volunteers will be at subway stations in Toronto handing out ribbons to support the campaign.