Kurdish Militia to take back Sinjar 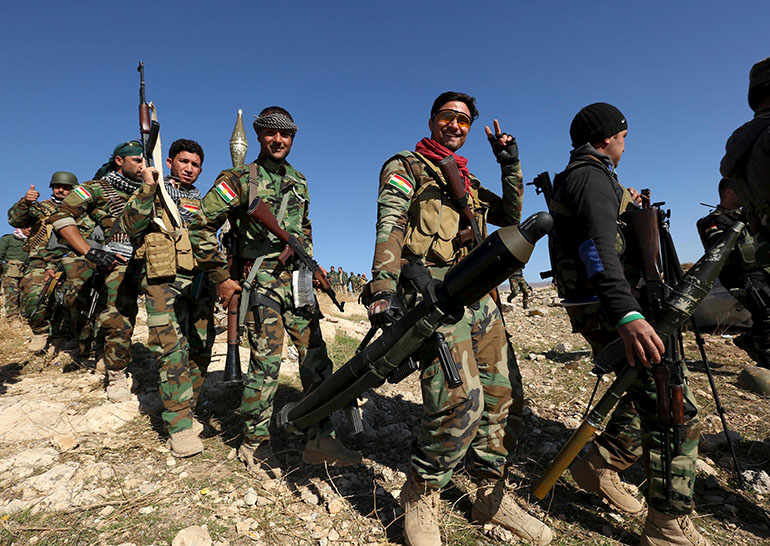 Kurdish military has achieved a major milestone in the battle against the extremist group ISIS.

The Peshmerga, part of the Kurdish militia, proudly raised a Kurdish flag over the Iraqi city Sinjar. This was a strategic goal in the fight against the extremist group.

The Kurdistan Regional Government explained in a press release the tactical importance of regaining the city and surrounding villages.

Smoke rises from the site of U.S.-led air strikes in the town of Sinjar, Iraq. (Photo/Reuters)

“On the Eastern Front, Peshmerga succeeded in reaching Shkefte Mountain, which overlooks Tal Afar and ISIL villages nearby. This vantage point, previously used by ISIL to fire mortars at Peshmerga positions, will enable the Peshmerga to monitor ISIL activity and target their positions,” the press release stated.

The Peshmerga also claimed a nearby major highway, Highway 47, which is one of the main supply routes in and out of the country.
The militia group has been working with the United States Defense department in a combined joint task force called Operation Inherent Resolve. The U.S. has been supplying airstrikes to aid the Peshmerga.

“By controlling Highway 47, which is used by Da’ish to transport weapons, fighters, illicit oil, and other commodities that fund their operations, the Coalition intends to increase pressure on Da’ish and isolate their components from each other,” a statement by the U.S. Defense department said in a statement explaining the significance of recapturing Highway 47.

Throughout Thursday, the Kurdistan Regional Security Council kept Twitter followers informed of the seizure, tweeting updates when a new area was cleared.

The Kurdish militia were also able to reach an Iraqi Army military base as well as gained many weapons. The final stage of the city is to enter and clear it of ISIL members.

Sinjar has been under ISIS control since August, 2014. The event is known as the Sinjar massacre where an estimated 2000-5000 Yazidi men were killed and survivors were told to convert or face death. Those fleeing were pushed into Mount Sinjar and trapped without food or water until aid was able to reach them. Yazidis are an ancient religious community considered a minority in Iraq.