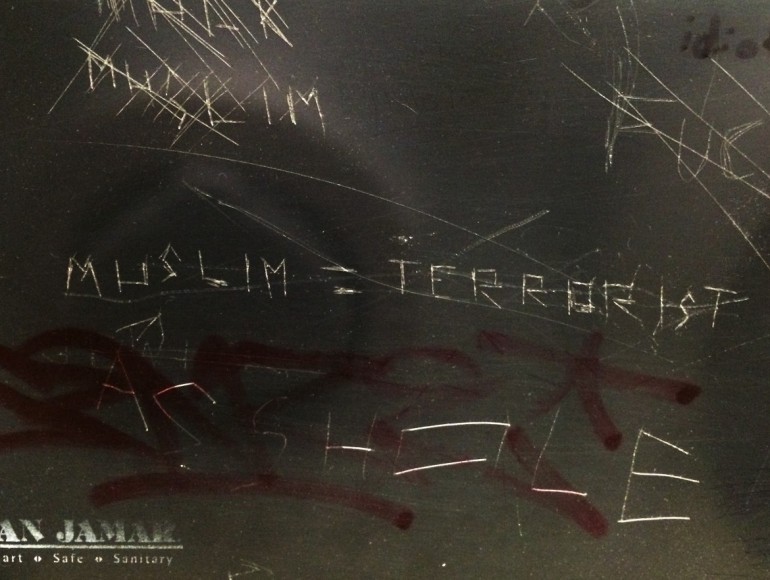 A Humber student was reading the newspaper on a subway last week when she noticed a man watching her. She felt uncomfortable but tried to ignore it and keep reading.

Suddenly, the man walked up and grabbed the paper from her hands, shouting, “You don’t get to read the newspaper if you’re f—king making it.”

Incidents of Muslims being verbally and physically harassed in the wake of the Paris terror attacks are on the rise, and making headlines across the GTA.

The Humber victim was a member of the college’s Muslim Students’ Association. She reported the incident to the group’s vice president Zahra Farahmand who recounted it for Humber News.

Farahmand said these incidences are all too common.

“Even I have been yelled at in the street,” she said. “The worry is if it becomes physical. This wasn’t just shouting, he snatched the paper from her.”

Farahmand filed a report about the attack on the student with the Department of Public Safety at Humber last week.

In light of the incident and a similar one involving Islamophobic graffiti on campus, Humber President Chris Whitaker released a statement on Friday.

“We are aware that at least one of our students has been harassed based on their religion, and racist graffiti was also discovered on campus,” he said in the statement.

The post asked for victims and witnesses to report any similar confrontations and for students to support their peers.

Whitaker told Humber News on Monday that he hopes the statement will help students feel safe and welcome on campus.

“As an institution of learning, our mandate is to help people with their learning and understanding. Hopefully through education we can reduce some of the fears and ignorance that leads to some of this behaviour.”

Despite Whitaker’s words, it appears that incidents of racism or Islamophobia on campus may be going unreported.

For example, graffiti carved into a toilet paper dispenser in a men’s washroom on campus has been there for over a year. It reads, “MUSLIM=TERRORIST.”

Graffiti carved into a toilet paper dispenser at Humber College.

Rob Kilfoyle, Director of Public Safety and Emergency Management said he had no idea that the graffiti was even there.

“Unfortunately if it doesn’t get reported in to us we don’t know, but I’m going to have someone have a look at that right away.”

Kilfoyle said that the Department of Public Safety can link victims up with counseling and other services. They also facilitate sanctions for perpetrators.

Farahmand said that in the subway incident, someone did intervene.

“He told the guy to calm down and sit down. She got off the train and took the next one,” Farahmand said.

Whitaker said he hopes Humber students will also intervene if they find themselves in a similar situation.

“If we show that we’re all standing as one against this type of behaviour then we demonstrate that it’s not acceptable and that we all want to be part of the solution,” he said.

He encourages all students to report incidents of Islamophobia to the Department of Public Safety.

On Friday, Humber News filed a report on efforts to support the Muslim community.