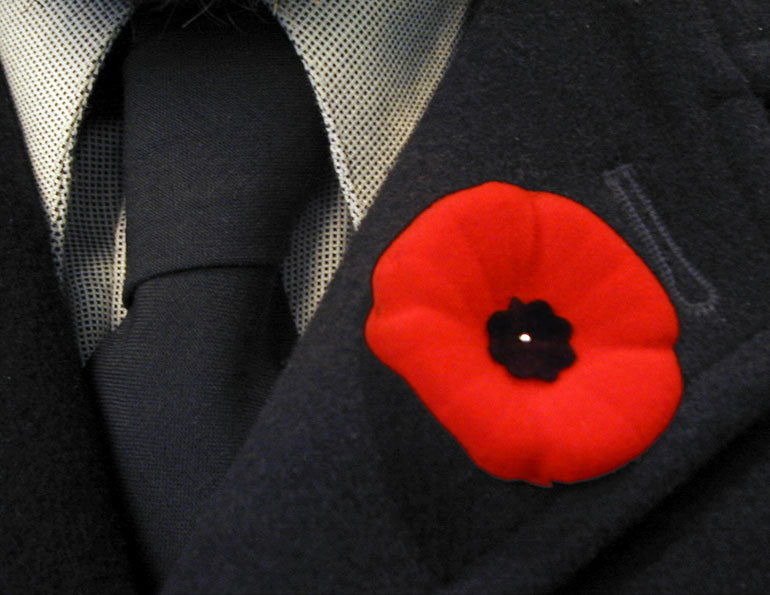 A man pauses as he touches the Tomb of the Unknown Soldier after placing his poppy on top following Remembrance Day ceremonies at the National War Memorial in Ottawa, Friday, Nov. 11, 2011. Courtesy: Adrian Wyld / The Canadian Press

Canadians across the country are preparing to take two minutes Wednesday to remember the sacrifices of those in uniform.

A Historica Canada poll reported that 82 per cent of Canadians believe Remembrance Day is as important now as it was at the end of the First World War.

Over 90 per cent of Canadians polled believe more needs to be done to honour veterans and that youth are not as engaged in recognizing veterans’ sacrifices.

“Veterans need our support all the time morally and in many other ways,” said Tom Eagleson, media president for the Royal Canadian Legion.

It is for these reasons that the Royal Canadian Legion was founded in 1921 “by veterans for veterans,” Eagleson said.

The Legion supports veterans through a number of year-round initiatives, the most successful being the annual poppy campaign which Eagleson said generated $16.5 million in 2014.

“That money went right back on the streets, including a $1 million donation (to buy) an MRI machine that veterans can use,” said Eagleson.

Janice Summerby, a spokesperson for Veterans Affairs Canada, says “the ultimate challenge” is maintaining the spirit of honouring veterans beyond Remembrance Day.

“It’s good that people feel veterans deserve more recognition. Honouring veterans is a shared activity and we’re dedicated to that. The legacy of veterans is what we celebrate all year,” said Summerby.

It is that desire for recognition that prompted Veterans Affairs to extend Remembrance Day into Veterans’ Week, celebrating its 20th anniversary this year.

“We encourage everyone to wear a poppy, go to a ceremony in your area, thank a veteran,” said Summerby.

Veterans Affairs is confident that initiatives beyond the Veterans’ Week will allow that reverence to endure.

“There are so many anniversaries coming up, including the 100th anniversary of Vimy Ridge, which will see thousands of students going to commemorate it,” said Summerby.

Veterans Affairs and the Royal Canadian Legion both have learning resources available for classrooms, and the Legion organizes a track and field program for students aged 12-17, an essay contest and an overseas trip to discover the battlegrounds Canadians fought on a century ago.

“The trip is an incredible learning experience for young people,” said Eagleson.

On a more local level, both Veterans Affairs Canada and the Royal Canadian Legion encourage the public to join the 18,000 volunteers in 1,443 branches across Canada that offer a number of services for veterans, as well as a place to connect with fellow servicemen and women.

Services offered range from lunches and dinners, to helping veterans with paperwork free of charge.

“The simplest things are so meaningful. You can just pop out of your bubble and talk to a veteran and thank them for their service,” Summerby said.

Texting “poppy” to 20222 donates five dollars to the Canadian Legion.

Information about Veterans’ Week ceremonies across Canada can be found at the Veterans Affairs Canada website.