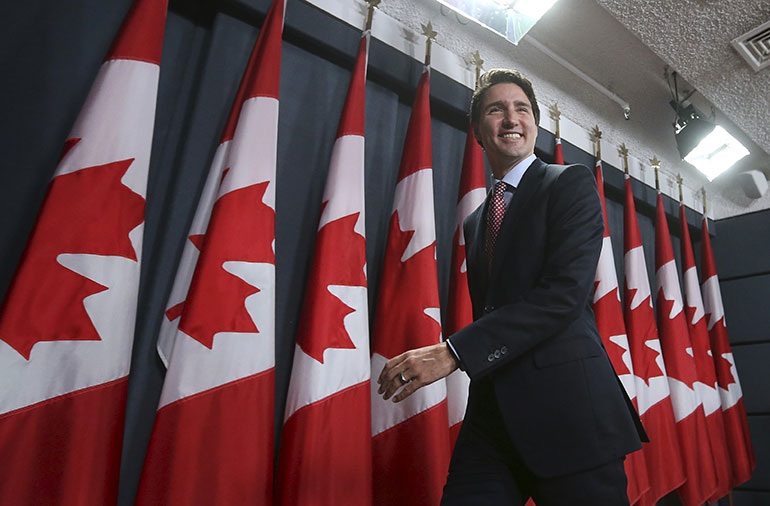 The wait will be over Wednesday for the launch of Canada’s new federal government.

Justin Trudeau, whose Liberal party won a landslide victory on Oct. 19, will be able to remove “designate” from his title and be sworn in as prime minister.

The Liberals are bucking the trend of having individual cars transport all new cabinet ministers to the residence of Governor General David Johnston. Instead, they’re all travelling together by bus.

Trudeau has also invited members of the public to attend, a landmark change for a federal swearing-in ceremony.

The Governor General’s official website details the day’s proceedings which include the following:

Infographic on the swearing-in ceremony procedures. Courtesy: Office of the Governor General

Also Wednesday, Canada’s current Prime Minister Stephen Harper, whose Conservative party lost the election, will privately tender his resignation to Johnston prior to the ceremony.

Celine Quinn, a former parliamentary page, was on hand for the 2011 swearing-in of Harper’s majority government.

“Each member will swear their allegiance to the queen, as well as the pages, then the new MPs take their official picture and then they’re given an MP 101,” said Quinn.

Quinn expects the focus of the ceremony this year will be Trudeau’s new cabinet.

“The attention will be on the cabinet and who he chooses versus the actual oath,” said Quinn.

Trudeau’s cabinet selection aims to be an equal playing field with respect to gender, race, experience in Ottawa and regional representation.

Quinn called the effort “a step in the right direction” and will “change the face of politics.”

“It’s not perfect because in a perfect world we wouldn’t even be talking about this, but it’s still an old boys club so seeing visible minorities in cabinet is important,” said Quinn.