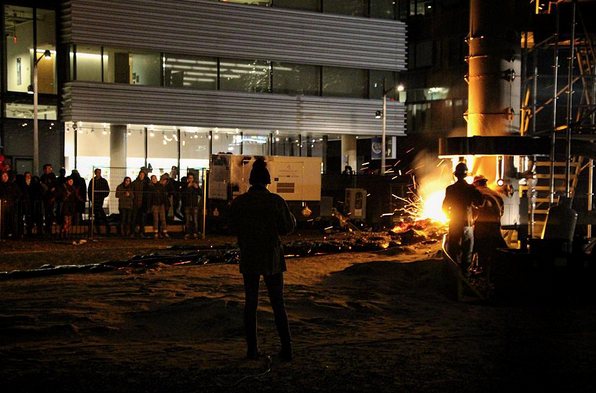 Scotiabank has pulled its sponsorship for Toronto’s annual Nuit Blanche, an all-night contemporary art event that was held in the city just last weekend.

“Lava Field No. 2” by Robert Wysocki. Photo by Nick Westoll on Instagram

In a statement sent to Humber News on Tuesday, Scotiabank spokesperson Andrew Chornenky said the bank informed event organizers in February that they would not be renewing their sponsorship for 2016.

The bank has sponsored Nuit Blanche since its inception in 2006.

Chornenky said that Scotiabank is assisting the organizers to identify new sponsors.

It may prove difficult to find companies who will sponsor the event after recent reports of violence, drugs and vandalism around Dundas Square.

Nadia Rashwan, 26, attended the event, but told Humber News she was disappointed.

“The concept is a great concept but it seems like it has become something for minors to do. It’s more like a party scene,” she said. “There were lots of people running around and being debaucherous.”

“I don’t usually go,” she said. “It’s not really about art anymore.”

This year’s event started over the weekend, and some exhibits will continue until Thanksgiving Monday.