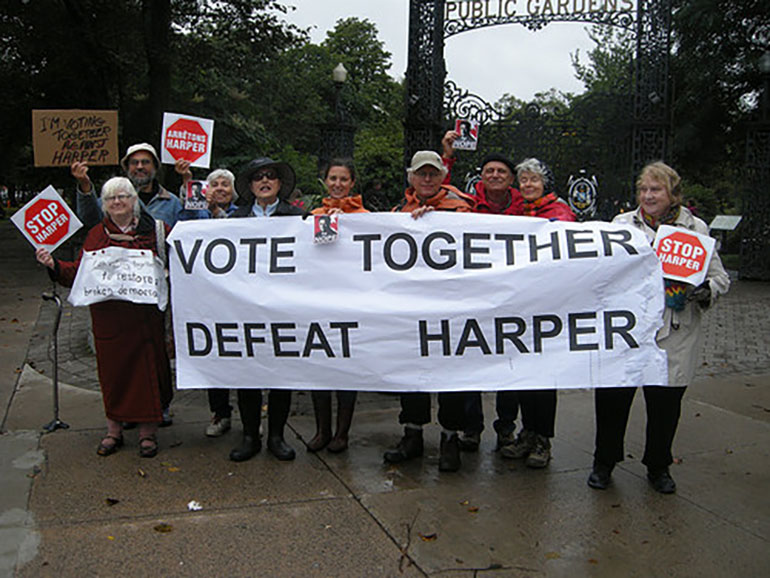 Many groups that are desperate to defeat Stephen Harper are advocating strategic voting but experts are raising questions about the effectiveness of such campaigns.

Websites like votetogether.ca, anyonebutharper.net and strategicvoting.ca encourage Canadians to vote for the number two candidate in contested ridings with a Conservative lead.

Dr. Nelson Wiseman, director of Canadian studies at the University of Toronto, said he doubts this will affect the election’s outcome.

“Sites like this existed in other elections like the last election and what we saw is that they were encouraging people to vote strategically to defeat the Conservatives and the result was the Conservatives got a majority,” he said.

“What’s happened in the past with strategic voting efforts is that there hasn’t been good local information and people have tried to make predictions about local trends by using regional projections as well as national polls,” said Katelyn Northam, who represents Vote Together in Etobicoke-Lakeshore.

The brochure cites polls showing the Liberals leading by a narrow two per cent over the Conservative party in the riding.

According to Maloney’s campaign manager, Julien Di Ciano, the goal of the pamphlet is to educate people on what happens when multiple parties run for the same seat.

“The government’s in with 39 per cent of the vote yet they get 100 per cent of the power and until you spell it out and put it on paper, people really don’t get a good understanding of how that vote splitting works,” Di Ciano said.

“That was a Liberal riding before last election, the Liberals are way up in the numbers in Ontario,” he said. “That’s going to cascade into various ridings so they just have to pick up a few votes there.”

However, Northam disagreed with that view

“I think what we’re hearing and the reason why we’re running this campaign is that people want change in this election and we know that our electoral system is broken and that first past-the-post electoral systems distort what people really want,” she said.

Vote Together wants whichever party wins the election to focus on electoral reform to prevent future strategic voting. “One of our priorities after the election is to make sure that the party that forms government or parties that form government put that as a priority for their agenda,” she said.

Current polls are showing that the Liberals are leading with the potential to form a minority government.

“That’s today, but six weeks ago they were suggesting that the NDP would win a minority government,” Wiseman added.