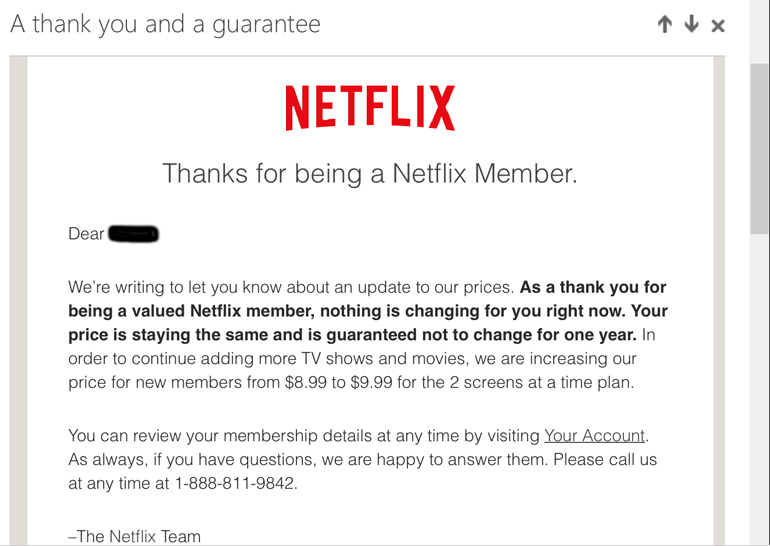 Canadians looking to join Netflix will have to dig a little deeper into their wallets.

The video streaming service emailed subscribers Thursday to confirm the increase to $9.99 from $8.99 in order to watch programming on two devices. The increase is effective immediately.

However, existing customers are expected to pay the same rate well into 2016.

According to Bloomberg, Thursday’s increase is needed to cover the cost of licensing shows and funding additional original programming.

Netflix is weighing consumer acceptance of the new change and it looks to be in the provider’s favor. Canadians are increasingly turning to Netflix for their entertainment needs.

The Media Technology Monitor surveyed 4,002 English-speaking consumers by phone in fall 2014 and found that 39 per cent of Canadians were Netflix users.

Most Netflix subscribers said they were frequent users of the online service.

But is the new increase of price a big deal for current and new customers?

Dominic Dutrisac, a post-grad radio broadcasting student and avid Netflix user, said the price is reflective of the quality of the content.

John Tenbride, a first-year Humber general arts and science student, uses Netflix occasionally. He said based on his usage, the price hike doesn’t affect him.

It’s about to cost you more to Netflix and chill http://t.co/iWe3PZH9Po — Yahoo Finance (@YahooFinance) October 8, 2015

There are two other viewing plans that won’t be affected by the increase:

The basic plan, for $7.99 a month, offers viewing on one screen, but doesn’t provide high definition streaming.

The premium plan, for $11.99 a month, offers streaming on four screens with 4K of ultra HD content.