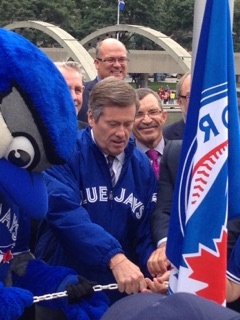 By Andy Redding and Domenic Loschiavo

The road to the world series begins Thursday afternoon, but that didn’t stop the festivities at Toronto’s City Hall Tuesday afternoon.

The flag was to show support to the team as they kick off their first post-season game in 22 years.

Tory went on to say that he plans to setup outdoor viewing for those who are unable to watch the games from home.

The Jays face off against the Texas Rangers Thursday afternoon.