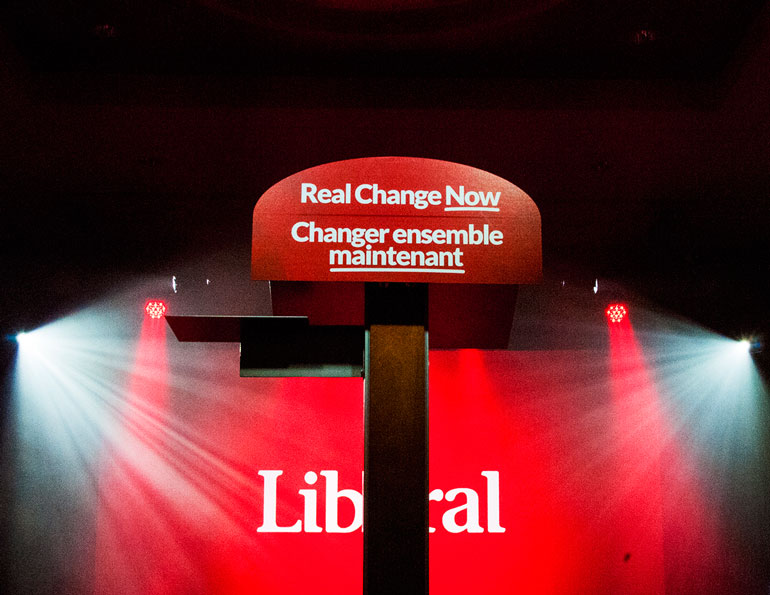 Trudeau has achieved the unthinkable, pulling the party that was polling third at the start of the campaign into a decisive majority government. The party won 184 seats in this historic campaign, a huge gain from their 2011 showing of 34 seats.

The historic victory saw the Liberal party picking up 150 more seats than in 2011. Trudeau’s victory is the largest increase in seats that any party has achieved in a Canadian federal election, rivaled only by the win of Brian Mulroney’s Progressive Conservatives in 1984, where the party gained 108 seats.

“Sunny ways, my friends. Sunny ways,” he said to a roaring crowd.

The mood at Trudeau headquarters in Montreal was electric, according to Humber News reporter Tyler Bloomfield.

Trudeau’s speech leaned heavily on the message of positivity that he campaigned with from the first day of the 78-day race.

In his speech, the prime minister-elect was very clear that the Liberal party’s victory could be attributed to its supporters.

“We won this election because we listened,” he said on behalf of the party.

How the night played out

The Liberals swept Atlantic Canada where polls closed first. Nova Scotia, New Brunswick and Newfoundland and Labrador all went red.  Neither the Conservatives nor the New Democrats were able to pick up a seat in the region.

This would set the tone for the remainder of the night. The Liberals picked up 19 new seats in the Atlantic region. The races were not close, a majority of Liberal candidates won by large margins.

As polls closed from Quebec to Alberta at 9:30 p.m. EDT results began pouring in and a new vision of Canada began to emerge.

The Liberals captured a majority of ridings in the GTA, an unexpected and unprecedented result.  Only Thornhill and Markham-Unionville were won by the Conservatives. The Liberal sweep continued into the 905 ridings, with a majority of formerly blue ridings going red.  The entirety of the GTA became a hotbed for Liberal support, something not seen until this election.

By the time the Liberals were leading and elected in just over 50 ridings, the major news networks called a Liberal victory.  It wouldn’t be until the Liberals quickly approached the required 170 seats that news networks began predicting a majority government.

The once mighty Bloc Quebecois were able to pick up ten seats in the province, up from the four they received in 2011. However, Bloc Leader Gilles Duceppe failed to win in his own riding.

Unsurprisingly, the west remained blue.  Harper’s core supporter base in gave the outgoing prime minister their votes once again.  Alberta was entirely blue and a majority of ridings in Manitoba and Saskatchewan went blue as well.

This was the only region that gave decided support to Harper.

In British Columbia, the province was split between all parties.  The Tories lost some seats in the province to the NDP and Liberals, adding to the strength of Trudeau’s numbers.

Elizabeth May was able to secure her party’s only seat in her riding of Saanich-Gulf Islands.

The orange wave ripples out

Following a successful campaign in 2011, the NDP lost a majority of their seats on Monday.

Ridings that had star NDP candidates in them were lost to Liberals. Olivia Chow, widow of former NDP leader and opposition leader Jack Layton, conceded defeat to Adam Vaughan in the new riding of Spadina Fort-York.  Despite polls indicating that the race was close on the eve of the election, Vaughan dominated the riding, taking 55 per cent of the vote.

Even Layton’s old seat in the Toronto-Danforth riding shifted from orange to red.

Every NDP incumbent in the Toronto region lost their seat to the Liberals, including the seats held by Peggy Nash and Andrew Cash.

Quebec was a critical province for the NDP in 2011, on Monday, Thomas Mulcair’s NDP saw their support in the province crumble.

Prior to election night, polls indicated that NDP leader Thomas Mulcair might lose his seat to a Liberal candidate. However, Mulcair was able to hold on in Outremont, taking the riding with a margin of more than 4,000 votes.

Overall, the NDP lost 59 seats, a staggering defeat from their performance in 2011. It’s a huge reversal of fortune for the NDP, which formed the official opposition for the first time ever following the 2011 election and entered the 2015 campaign in the lead.

Harper spoke in general terms, thanking the crowd for their continued support. “In the last nine and half years I had the unbelievable honour to serve as your prime minister,” said Harper

“We put everything on the table, we gave everything we had to give, and we have no regrets whatsoever,” said Harper.

In a nine-minute speech, Harper offered his congratulations to the other major party leaders. Picking up 99 seats, the Conservatives will become the official opposition in the House of Commons.

” Tonight, we elected an official opposition that is strong,” said Harper.  “When the next time comes, this party will offer Canadians a clear alternative based on our conservative values.”

However, Harper did not indicate that he would be stepping down as leader of the party. Minutes before his concession speech, the President of the Conservative party issued a statement that Harper would be resigning leadership of the party.

Harper is going to remain as an MP in the riding of Calgary-Heritage as the Tories move to name an interim party leader.

In his concession speech, NDP leader Thomas Mulcair told the crowd in Outremont, “Canadians have turned the page on ten long years and they have rejected the politics of fear and division,” referencing campaign tactics undertaken by Conservative leader Stephen Harper.

The NDP leader told the crowd of supporters that he respected the decision that Canada had made. “I congratulate Trudeau on his achievement for him and his party,” he said.

“We will work for you every day in this majority government,” Mulcair said, also not indicating if he would resign the leadership of the party.

“Canadians have asked us to work for them. We will not let them down.”

The New Democrats ended up in a dismal third place following Monday’s election.

Background to the 2015 campaign

At the start of campaign in Aug. the Conservatives were plagued by the Mike Duffy trial. The former senator was facing 31 charges including bribery and fraud. As the campaign started, Stephen Harper’s former chief of staff, Nigel Wright, was testifying in court.

While the spotlight was on Duffy, several sideshows attempted to snatch the limelight. Earl Cowan, a Harper supporter, bombarded reporters with insults and profanity as he expressed his disdain for the media and their coverage of the Duffy scandal.

The attack ads hurled at the Liberals by the Conservatives were unrelenting through the election. The “just not ready” ads attempted to paint Liberal Leader Justin Trudeau as inexperienced, while the Tories mostly ignored NDP leader, Thomas Mulcair, even though he had an early lead in the polls.

In comparison, Liberal ads focused around creating real change in Canada. They were attempting to show Trudeau as an agent of change and that Canadians, under Harper, were struggling.

This campaign included a number of incidents where the social media presence and past actions of candidates got them in hot water; some were even forced to resign.

The Conservatives dropped two candidates including Jerry Bance, who was caught on video urinating in a homeowners coffee cup while doing contractor work. Another, Tim Duatad, was dropped for making offensive prank phone calls.

However, the Tory candidates weren’t the only ones on who got in trouble on social media, Humber News covered all candidates that found themselves in hot water.

A senior aide to Mulcair had to apologize after social media postings from two years prior surfaced speaking out against the Catholic Church.

Alex Johnstone’s post from 2008 surfaced where she made comments about the phallic nature of fences at Auschwitz. The NDP hopeful later claimed she didn’t know what Auschwitz was.

In early Sept. a photo of a dead Syrian boy, Alan Kurdi, who had washed up on Turkish shores made headlines around the world. This picture had a critical impact on the campaign and put the Syrian refugee crisis at center stage.

Harper was criticized over Canada’s response to the refugee crisis and was facing pressure to increase the number of refugee’s Canada promised to bring in. This issue would continue to play a pivotal role throughout the election.

The format of the debates changed for 2015. Traditionally there are two debates; one in English and one in French. These were put on by a media consortium and broadcast on major networks nationally.

However, Harper refused to participate this year, leading to a new format including five debates. This also meant that those wishing to view debates had to go out of their way to stream it or watch it on CPAC.

Although there was no clear winners in any of these debates, opinion polls that followed began to show people thought Trudeau was ready to lead.

As the 2015 campaign went on the polls began to show that support for the NDP was dwindling and the orange wave that crashed over the nation in 2011 was rippling out.

Mulcair fell to third place in the polls by the end of the campaign.

Following their collapse in 2011, the Liberals entered the campaign polling in third place. Holding only 34 seats in the House of Commons, it seemed that the once mighty Liberals were out of the running in 2015.

Polls began to show a growth in Liberal support, proving that the party was far from being down and out. A Nanos poll published on Oct 16 showed Trudeau had climbed into first place with 36 per cent of support nationally.

In the middle of September, the Finance Department released a report showing a surplus of $1.9 billion for 2014/15. This was to become a ballot issue for some Canadians, with the Tories pushing a platform primarily focused on the economy.

The surplus came after Statistics Canada revealed that Canada entered into a recession in the first half of 2015. This helped spur the discussion of who would best lead Canada’s economy.

The campaign shifted from statistics to values when the niqab issue reared its head near the end of the race.

Since 2011 Harper has attempted to ban woman wearing the religious garment during citizenship ceremonies. The New Democrats and Liberals disagree with the niqab ban. The issue flared up primarily in Quebec, where Gilles Duceppe and the Bloc Quebecois ran aggressive ads in support of the ban.

For many, this was the turning point for the NDP campaign in Quebec, as polls suggested support for the party began to plummet in the province.

In the final days of the campaign the Liberals had their campaign co-chair, Dan Gagnier, resign over emails he sent to TransCanada Corp that provided the company with advice on how to lobby a future government.

Overall, the message of this campaign has been change. Both Trudeau and Mulcair have run ads portraying them as the change Canada needs. The desire for change can be seen from both sides, with the Globe and Mail endorsing the Tories, but calling for Harper’s resignation.

With files from Tyler Bloomfield.