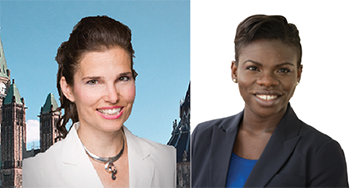 By Aresell Joseph and Ken Kellar

Liberal incumbent Kirsty Duncan will continue her reign as MP of Etobicoke North.

She has won her riding with 61.9% of the vote, while Conservative candidate Toyin Dada got 24.9% and NDP member Faisal Hassan received 10.9%.

Kristy thanks her volunteers for countless hours of hard work over this election . #humberelxn @RadioHumber pic.twitter.com/5YKhrIs1Tq

The Liberal Party has won Etobicoke North since 1988. The old Progressive Conservative party held it briefly from 1984 to 1988.

Duncan has been in parliament since 2008, and had said she intended to build upon her accomplishments if re-elected.

When pressed 4 comment on becoming a cabinet minister, Duncan instead spoke on serving the community she's "Born and raised in." #HumberElxn

In Ottawa, she has fought for better protection of the environment and women’s rights, and has sponsored more than 19 bills directed towards health and family issues.

Conservative candidate Dada is the former executive director of a non-profit and her platform said she would follow Prime Minister Stephen Harper’s political agenda if elected.

Dada’s campaign website said she would lobby in Ottawa for lower taxes, improving national security and balancing the budget.

NDP candidate Hassan had said he was committed to his party’s platform.

On his website, he said a Mulcair-led government would focus on creating affordable childcare and jobs with a strong focus on the manufacturing sector and small businesses.

Hassan also said that alongside Mulcair, he would support the NDP’s plan to improve CPP and amend the Canada’s workplace pension plan.

The Greens were fielding a first generation immigrant to Canada from Pakistan, Akhtar Ayub Khan, a mechanical engineer by trade.

He ran unsuccessfully against Etobicoke North Councillor Vincent Crisanti in the 2014 municipal election.

The riding of Etobicoke North is in the City of Toronto’s northwestern corner and is home to more than 111,000 residents, according to the 2011 census.

Duncan’s supporters greet her as she arrives at the banquet …she has been re-elected #humberelxn #canadianelection pic.twitter.com/3qf20XinSJ