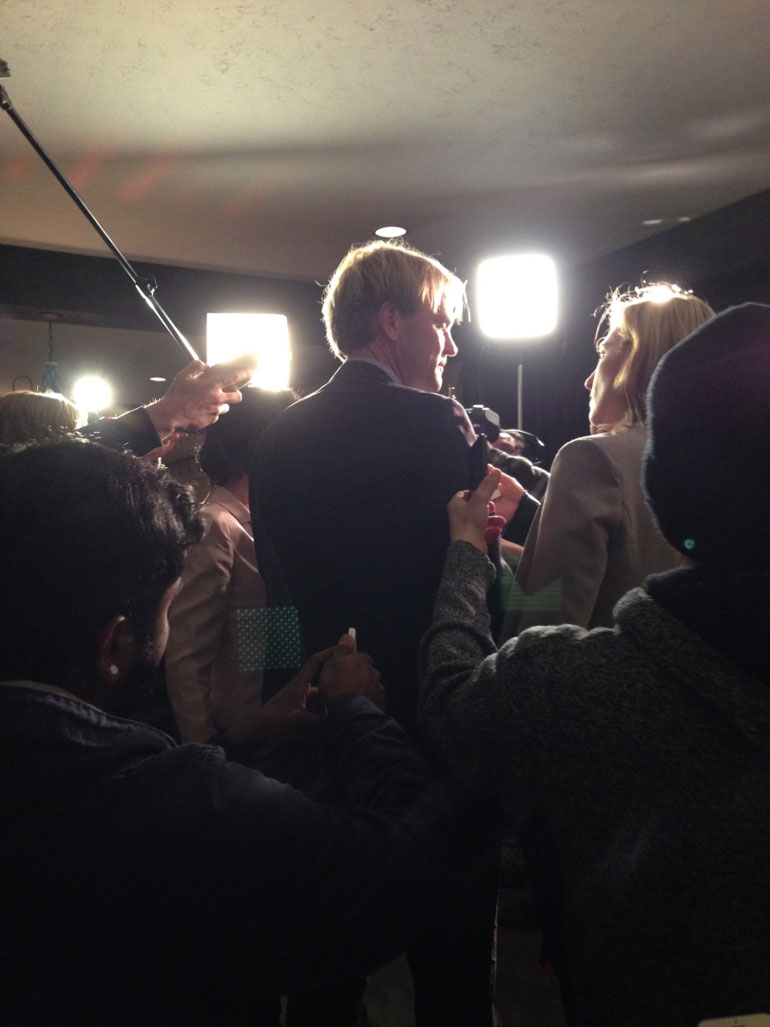 By Amy Wallace and Travis Kingdon

Holland received 55 per cent of the vote, beating the Conservative candidate by more than 8,000 votes.

The mood at Holland’s headquarters was electric.

Holland: it’s good to be back. #humberelxn

The outgoing Citizenship and Immigration Minister delivered his concession speech to a room full of media.   On his way to the podium Alexander hugged a supporter who shed some tears.

“I’m just proud to have been in your midst tonight, and every day in the last six years when we were elected,” said Alexander, speaking to the volunteers that made his campaign possible.

Although it was not the result he had hoped for, Alexander recognized the importance of the results and the overall democratic process.  “Yes, changing a government, yes changing direction, but doing it responsibly, doing it honourably, doing it with dignity, ” he said. dignity,” he said.

Prior to polls closing, the scene at Alexander’s headquarters was calm and quiet with only journalists present.

The scene at Holland’s HQ was very different from that at Alexander’s, with a large media presence and a lively crowd.

Prior to the 2011 election, Ajax was a Liberal stronghold — Holland held the riding for the Liberals for seven years.

During his time in the House of Commons, Holland’s direct and accusatory style of questioning earned him a reputation for getting under the skin of Conservatives, according to a 2011 article from the Globe and Mail.

After being booted from the House, Holland became Director of Health Promotion and Public Affairs for Heart & Stroke Foundation of Canada. He later became promoted to Executive Director for the Ontario Mission and National Director of Children and Youth.

Holland was facing Conservative candidate Chris Alexander, whom he lost to in the 2011 race for Ajax-Pickering by a margin of 2,782 votes.

For Conservative supporters, this election was a difficult one to predict.

“You usually get a feeling of where it’s going to go. In this one, nothing,” said Adrian Lambert, chief agent and CFO for Alexander’s campaign.

“I think he’s done an excellent job considering the portfolio he’s in,” said Lambert.  “If we elect him, he’d make a great MP.”

The town of Ajax was caught in the centre of a rivalry between two high-profile candidates, which put the newly-redistributed riding on the radar in the 2015 election.

Chris Alexander, Minister of Citizenship and Immigration, was the Conservative candidate. He was MP for the former riding of Ajax-Pickering, which was redistributed into Ajax and Pickering-Uxbridge.

An alumnus of McGill and Oxford, Alexander was considered a rising star in the Conservative party. Before entering the political realm, Alexander served as a diplomat: at the age of 34, he became Canada’s first resident ambassador in Afghanistan.

Alexander suspended his campaign in early September, after an image of a drowned Syrian boy surfaced. The story of Alan Kurdi dominated headlines across the country and forced a response from the government. In the wake of the Syrian refugee crisis, Alexander travelled to Ottawa in order to focus on his ministerial responsibilities.

The NDP candidate for the riding was Stephanie Brown, a political science and philosophy student at the University of Toronto’s Scarborough campus.

Jeff Hill was the candidate for the Green Party. Hill sits on the Ajax Environmental Committee and has a background in broadcast and multimedia journalism.

With files from Nick Beare and Ryan Durgy